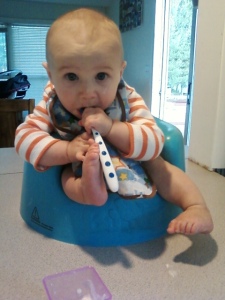 Ian has reached a funny phase where he won’t let me feed him.  It’s not that he doesn’t want to eat; he just doesn’t want to let me be in charge any longer.  We started “solids” (I use that term loosely) about a month ago, and so far Ian has tried carrots, sweet potatos, bananas, and now regular potatos.  Mainly he’s just learning how to use his mouth and getting used to these new flavors.  When we started with real food, Ian would sit patiently in his high chair, let me spoon small amounts into his mouth, roll it around in his mouth, and swallow.  Then he started grabbing my hand and pulling it to his mouth more quickly.  Now Ian will not open his mouth if I’m holding the spoon.  He’s willing to eat if I let him feed himself, but it takes forever!

Compromise: I set Ian on the kitchen counter right beside the refridgerator in his bumboo seat while I stand there and prep dinner.  I’m allowed to scoop up some potatos and hand the spoon to him so he can spoon potatos into his mouth, on his forhead, or on his feet while I cut carrots, mix batter, or grate cheese.  When he thinks the spoon is licked clean enough, he throws it down on the counter and makes it clear that he’s ready for a refill. It’s a lengthy process, but I can get a few small chores done while standing there, and Ian gets a big kick out of his independence.

“For in Calormen, story-telling (whether the stories are true or made up) is a thing you're taught, just as English boys and girls are taught essay-writing. The difference is that people want to hear the stories, whereas I never heard of anyone who wanted to read the essays.” ― C.S. Lewis, The Horse and His Boy Join us on our family adventures as I try to tell our stories rather than bore you with more online essays.
View all posts by ashleekiser →
This entry was posted in Family and tagged Children. Bookmark the permalink.