Yesterday started entirely too early.  Ian hasn’t yet learned the value in sleeping late on Saturdays, so up we got at 6:00 am while Brinn was out in the woods with some of the boys from the ranch.  Turkey season is in full swing so Brinn and the boys are spending quite a bit of their time sitting in blinds.

Ian and I began our day by knocking out ALL of the week’s laundry, and doing some massive cooking.  I try to do most of my week’s cooking over the weekend so that I don’t have to waste my day light hours after work now that spring is finally here and Ian wants to be outside all evening.  It turned out to be lucky that I’d been in the kitchen all morning since three of the boys killed turkeys and they all came over to our house so Brinn could help them breast out their birds.  Lunch transformed from a small affair for Ian and I, to a big spread for nine of us!  I turned to the freezer for some extra ground pork from the last wild boar a neighbor killed on his property for some emergency sloppy joes.  While I cooked furiously, Ian had a big time being one of the boys.  Right before lunch was ready, Lee brought Ian back upstairs with Ian’s head propped on his shoulder.  Poor little boy just couldn’t quite keep up.

Afterwords Ben, Kaleb, Ian and I headed off to watch football practice.  Matt had offered

to babysit after practice, so we decided to go and watch for a while first.  While the players ran through plays and did football activities that I didn’t understand, Ian climbed every stair in the west stadium.  I’ll owe this to Becca, another of Ian’s babysitters.  Becca’s another of Ian’s babysitters, and has been a huge blessing to us as her attitude towards children is that they should be outside and moving as much as possible.  Ian agrees wholeheartedly, so

he enjoys his time with Becca, especially since she takes him to the stadium to let him climb.  Now that’s his favorite way to spend an afternoon!  After practice, I left Ian with Matt, dropped the boys with Brinn, and I headed home to have an evening for just me and the ponies. 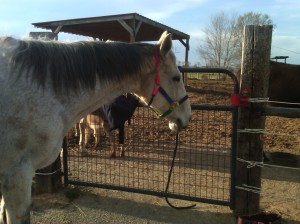 Bear, Reggie, and Ghost have looked like wild mustangs for far too long.  First I was pregnant and tired all the time, then I had an infant who needed to be held, and now I have a toddler who wouldn’t be safe underneath a horse.  Since I don’t get a whole lot of time for the horses right now, I usually just run out for 30 minutes at a time to slap a saddle on and trot around for a little bit before feeding.  But now I had a whole evening to spend!  I started with a great ride on Bear, because I’ve learned lately that it’s all about priorities.  I had to get in the most important part first in case my evening got cut short.  Bear and I are both terribly out of shape, so we stuck to a very basic workout: trying to maintain a consistent rhythm at the trot and canter, then maintain that rhythm while we hopped over a few logs out in the field.  It didn’t feel like I rode anytime at all yesterday, but today my calves are screaming otherwise.  It’s been too long since I’ve had to work on keeping my lower leg forward!

After my ride, it was on to beauty shop.  All three horses got a hair cut to get ride of their long, long manes.  I HATE a long mane.  When you’re trying to jump, that long mess gets tangled in your hands with reins and just causes a mess.  Much as I hate a long mane, though, I am terrible at pulling manes.  I never pull well, and I also break hairs and cause the entire mane to stick up like a mohawk.  Seeing as how I’m not going to any shows anytime soon, I fell back to scissors and chopped their manes to a more satisfactory length.  Then I greased everyone’s feet up good (since it’s been way too long since I’ve taken good care of their feet) and hit their soles with iodine.  I finished off with a heavy dose of conditioner to everyone’s tail.  Ah, the smell of Strait Arrow Mane and Tail… Takes me back to my preteen years when I spend rainy days practicing for hours on braiding Stormy’s tail…

While I’ve been playing my little ponies and watching football, Brinn’s been hard at work

checking in turkeys and fixing our pond.  When we bought our house, Brinn was excited that the property had a small pond.  After we moved in, Brinn started to dig the pond out to make it a little bigger, and he unearthed a very dirty secret: the previous owners had used the pond as a land fill for all the junk from remodeling the house.  So the pond has set for a few years now waiting for some attention  Brinn started yesterday and started pulling all that junk back out of the pond and getting it ready to haul off (as should have been done to begin with).  After

working for a while, Brinn developed a plan that he’s worked more on today.  He’s been sloping the sides of the pond in more gradually, and plans to pack it later this summer with crushed gravels.  Then he’s going to fence it to put hogs on for the rest of the year so that they can really pack it in well so that it’ll hold water better.  After we butcher the hogs, Brinn’s going to tear down the fencing, and build a jump in front of it so Bear and Reggie will have a cross-country playground!  I’m super excited.

Some of the junk Brinn unearthed from the pond area were big concrete slabs.  This

turned out to be a short-term blessing in disguise.  Another feature of our property is a well in the front yard, but it had no type of cover over it.  We’ve been planning to build a structure over it that will allow us to access the water easily, but let us lock it as well, but  this plan hasn’t emerged yet and Brinn worries desperately about Ian, so Brinn took one of these gigantic slabs to cover the opening of the well until we get time to build a more attractive cover.

While Brinn works, Ian and I have been running around the yard while he tries to chew on the water hose and I throw the ball over and over again for Mogwai.  We just came in for a diaper change a few minutes ago.  While I checked my email, I realized Ian had gone unusually silent so I spun around looking for him.  I found him behind me, on hands on knees, rubbing his face against the neck of his gigantic stuffed horse.  While rubbing, his eyes kept closing and he’d stagger forward, then jerk back up and start the process over again.  I guess nap time’s coming a little early today, so I’ve transferred this little boy to a giant pillow to sleep away the afternoon. 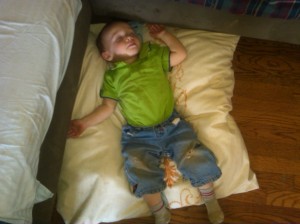 I guess I’d better get lunch ready while little boy is deactivated!

“For in Calormen, story-telling (whether the stories are true or made up) is a thing you're taught, just as English boys and girls are taught essay-writing. The difference is that people want to hear the stories, whereas I never heard of anyone who wanted to read the essays.” ― C.S. Lewis, The Horse and His Boy Join us on our family adventures as I try to tell our stories rather than bore you with more online essays.
View all posts by ashleekiser →
This entry was posted in Ian, My Critters and tagged babysitters, horses, naptime, spring football. Bookmark the permalink.