While Train may not have had my Virginia is mind as they wrote this song, some parts of it still ring true and describe her well.  Let me tell you about Virginia today…

I can’t hardly believe that it’s been seven years now since Virginia stormed into our lives at Tennessee Tech.  A retiree from the New Jersey public education system, she had moved to Tennessee after remarrying, and soon found that she needed something else to do with her time.  On top of her volunteer efforts, crafting projects, and avid reading, Virginia still felt that she had too much free time on her hands.  Juggling a load that most would cave under, she carried it with ease, and decided to go back to school for an extra degree just for something else to do.  In January, she entered the English masters’ program at TTU.  Most of us had entered graduate school together in August, so we already knew each other fairly well.  Virginia came into the mix a little late, but left such an impression on all of us.  Some days we were so jealous of her that we almost couldn’t stand it.  We would spend hours on end trying to finish all the assigned reading for the week, while she could pick up a 300 page novel and read it in one sitting and remember every detail perfectly. 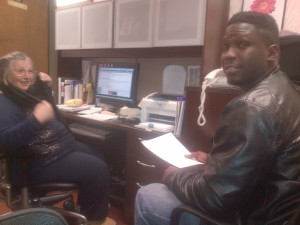 on Virginia’s already crowded plate, she also started volunteering with TTU’s athletic department and began tutoring student athletes in English.  In time, this turned into a full-time position and she became the athletic academic coordinator.  Impressive, huh?

Virginia gets along as well as she does because she’s so driven.  When she gets an idea in her mind, she will see it through to the end.  What makes her an amazing friend is that she applies the same tenacity towards helping others.  I can’t even begin to thank her enough for all that she’s done for me.

After grad school, I taught a few adjunct English courses at TTU and primarily worked as a trainer at a local stable.  I loved loved loved my job at the barn, but giving lessons and coaching can be very inconsistent work, and horses sometimes pile you up in the dirt.  I’d looked at picking up a few more classes to teach at the local community college, but its director never called me back after I’d applied.  A year later, however, Virginia stepped in.  She had started teaching there at this point (on top of working with the athletes, still crafting, still reading, and still volunteering and helping with local charities), and announced to the director that he needed to hire me and she’d be bringing me in to meet him.  Then she proceeded to call me and said “get up here!”  I went from not being able to get my foot in the door, to being handed four classes to teach that fall.  I was even able to buy a new horse that fall my extra income!

A few more years went by, and I continued to teach a million sections of English, well, maybe it was only seven sections, but a normal “full load” is only four sections, and Virginia continued to be my teaching mentor.  She was of particular help with the developmental writing courses I taught.  Her years of working with learning disabilities in Jersey have shaped her into a master at teaching the basics, and understanding students’ needs.  Then, over Christmas break 2011, I received a call from Virginia.  Brinn answered the phone, then handed it to me.  The first words out of Virginia’s mouth were: “why haven’t I seen your application for this job yet?”

See, athletics had just advertised for a new academic advisor.  I’d even considered applying, but what did I know about advising.  On top of that, I had just started into a full-time position in English.  But my position in English was only a three-year contract, so I listened to everything Virginia had to say.  A week later she brought me in to the athletic advising office, introduced me to the director, Dr. Jasitt, and proceeded to share the kindest and most complimentary words about me personally and professionally.  I turned my application materials in after Virginia reviewed them for me, and boom, I found myself experiencing a complete career change!

When Virginia chooses someone to become one of her people, she completely adopts them as one of her own.  Not only has she taken me in, but she’s claimed Brinn and Ian as well.  She’s my TTU parent, and an honorary grandparent to Ian.  She has two grandsons back in New Jersey who she drives to see during every work vacation, and her whole face lights up when she shares stories with us about those boys.  Virginia also treats our student athletes this way as well.  She can be their biggest cheerleader in the classroom, but will also be the first to throw their essays and homework away and tell them that it’s terrible, now do it better.  I’m honestly not sure that some of our guys would have made it to graduation if it weren’t for the study skills and work ethic that Virginia helped cultivate in them.

Because Virginia’s tenacity has carried her so far, she strongly admires ornery behavior in others, and sometimes even encourages it.  She loves the tales of her grandsons when they cleverly outwit adults, and she encourages Ian’s exploits as well.  Her feelings are that children who don’t push the limits and explore are the ones we should worry about.  She’s not too worried about Ian 🙂

“For in Calormen, story-telling (whether the stories are true or made up) is a thing you're taught, just as English boys and girls are taught essay-writing. The difference is that people want to hear the stories, whereas I never heard of anyone who wanted to read the essays.” ― C.S. Lewis, The Horse and His Boy Join us on our family adventures as I try to tell our stories rather than bore you with more online essays.
View all posts by ashleekiser →
This entry was posted in Uncategorized. Bookmark the permalink.