Ian had a fairly low key first Halloween, but by golly, he had a Halloween!

I didn’t carve my first jack-0-lantern until I was 24 years old.  I had no idea what I was missing!  I’m certainly not a master pumpkin carver, but I can certainly crank out an awesome Sirius Black!  Brinn defaulted to the sick pumpkin. 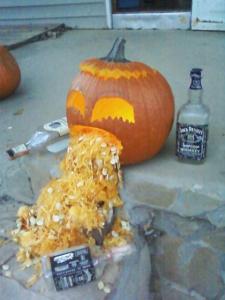 Last year we carved equine themed pumpkins.  I found a cool website with horse patterns, and I decided to carve the dressage horse.  Pumpkin carving during pregnancy made for some interesting moments as the smells of pumpkin guts wafted out of the top of the

pumpkin, into my nostrils, and down to my protesting stomach.  So my dressage pony didn’t get the attention to detail I’d hoped for.  Brinn decided to do a donkey, but felt that the pattern I’d found for him wasn’t accurate enough for Dominick, so he had to make it a bit fatter.

fussing.  Brinn and I wanted good memories of this day rather than memories of an upset baby.  So… Ian spent his first Halloween as Derek Dooley, head coach of UT football.  Dereck Dooley turned heads, and burned a few eyeballs, when he started wearing his signature orange pants.  Tennessee football has a history of coaches in orange pants, but according to Coach Dooley, Johnny Majors never spent as much on his orange pants, so

they didn’t pop quite as much as Coach Dooley’s do.  Ian made the orange pants look awfully cute.  If his Grandpa has his way, this is just the start of Ian’s rise in UT athletics.

As cute as Ian’s orange pants were, his favorite part of the night was his treat bucket.  He loved gnawing on the handle, and refused to let go of it.  He showed so much enthusiasm for his bucket, that Mogwai wanted to know what was so special about it.  It made an interesting evening of keeping the baby and his dog out of chocolate.

We only made it to two houses this Halloween.  I didn’t get home from work until 5:00, and Ian is pretty rigid about his bedtime schedule.  Come 7:00 little Mr. Cinderella has to be home and in bed or the jeep will turn back into a pumpkin pulled by mice.  So as we tried to hurridly get Ian dressed and out the door, he of course had to have a last minute diaper change, then

he spit up on his shirt, and then he wanted to eat since his belly was empty again.  So by the time we got out the door we running a smidge behind, and we headed off to see Ms. Terri.  Ian’s a pretty big fan of Ms. Terri.  She runs a boarding stable/barrell racing barn a few miles from us and will probably give Ian cutting and roping lessons when he’s big enough to start riding.  Terri’s a close friend, and never hesitates to help a friend in need.  She’s helped me wrap my silly thoroughbred when he tried to slice his foot off, and she helps us when we’re running short on horse medications.

From Terri’s we made it to Larry and Linda’s.  Larry is the instructor who taught Brinn how to do taxidermy work, and they’re still good friends. 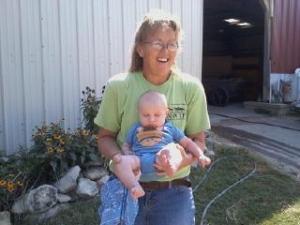 All in all, it was a pretty good holiday.  When Ian’s older and more aware, I want to have a big Halloween party at home.  It’s quite possible that I’m doing this less for Ian, and more for all the Halloweens I missed as a kid.  The last Halloween that my family celebrated was amazing.  My mom wasn’t big on letting us run around on the roads at night and accept candy from strangers, so she created a Halloween wonderland at home in the front yard.  I WISH we had pictures of it.  She invited over family, which in our small community meant TONS of cousins.  I’ll explain my extended family another day.  I remember corn stalks tied in bundles all over the yard with pumpkins around them.  She also made homemade candied and carmel apples, homemade popcorn balls, and provided lots and lots of candy.  The weather was fairly mild that night so we bobbed for apple

s and ran three legged races in between hopping around in potato sacks.  That was such an incredible night for Preston and I; I can’t wait to recreate it for Ian!

“For in Calormen, story-telling (whether the stories are true or made up) is a thing you're taught, just as English boys and girls are taught essay-writing. The difference is that people want to hear the stories, whereas I never heard of anyone who wanted to read the essays.” ― C.S. Lewis, The Horse and His Boy Join us on our family adventures as I try to tell our stories rather than bore you with more online essays.
View all posts by ashleekiser →
This entry was posted in Friends, Holidays, Ian. Bookmark the permalink.