Down Home on the Farm 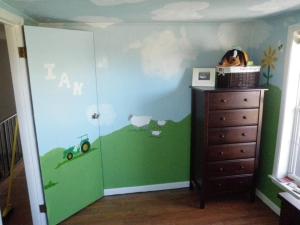 I have to admit that I’m not the biggest fan of most nurseries.  I just feel like they’re, well, too babyish.  For months friends kept asking, “what theme are you using in the baby’s room?”  Um…?  I couldn’t think of any standard baby decorating ideas that struck a chord with me.  Then someone suggested farm animals.  Was it me?  Brinn?  Joy?  I honestly can’t remember which one of us recommended this brilliant idea, but it worked!  We have a menagerie of critters running around our place, we enjoy gardening, and my dad is a John Deere man.  Why didn’t we think of a farm theme sooner?

Missy, one of my oldest and most treasured friends, works magic with a paint brush.  She’s

one of those rare souls who can “see” the picture while the rest of us stare at a blank canvas.  I already have one painting by her hanging in my living room.  So many guests compliment my taste in art when they see this painting, and want to know who the artist is.  When I give them Missy’s name, they’re shocked that it’s not by someone really well-known.  I think it’s just a matter of time before Missy’s as well-known in current culture as Thomas Kincaid.

Last March, I asked Missy if she would consider painting a few farm animals on Ian’s walls to help us pull the theme together.  I was expecting a horse, a pig, or a cow, maybe a few chickens, and perhaps a bale of hay.  Missy, on the other hand, developed an elaborate scene in her mind’s eye and painted every surface (except for the floor) of this little boy’s room! 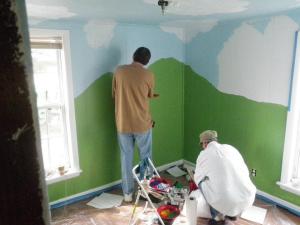 She started by doing green for grass all the way around the room, and blue for the sky above that with white fluffy clouds!  The really cool part about the process was that as she rolled on the paint for the background, she left blank spots for all the images she would add.  She left exactly the perfect shape and size blank and letter transformed them into farm objects and animals without having to go back and add more blue or green around.

Missy also wanted to know where all Ian’s furniture would be placed so that she could plan her shapes accordingly.

Even though the crib would cover it, she painted flowers on that wall so that they could peak through the slats of the crib, giving Ian something to look at.

My favorite part of the room, is that Missy incorporated all of our animals into the scene!  Mogwai treeing a squirrel. 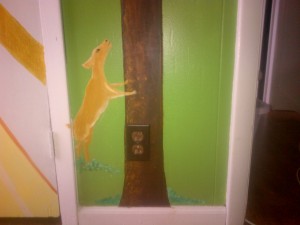 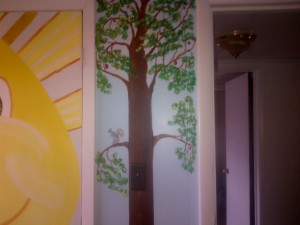 And you can also see Chaco sitting in front a barn trying to be a good girl. 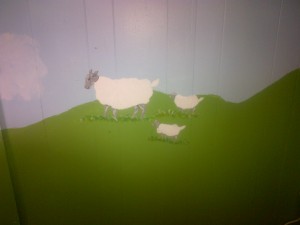 And what’s a farm without sunlight to sustain it?

With the occasional flower thrown in. 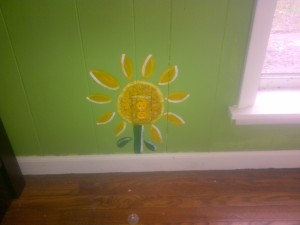 I love how Missy designed Ian’s door to flow with the rest of the room rather than cover up or disrupt the flow of the scene.

And for good measure Missy also gave Ian a rocking horse to go along with his farm lifestyle.

Thanks, Missy!  We love you!

“For in Calormen, story-telling (whether the stories are true or made up) is a thing you're taught, just as English boys and girls are taught essay-writing. The difference is that people want to hear the stories, whereas I never heard of anyone who wanted to read the essays.” ― C.S. Lewis, The Horse and His Boy Join us on our family adventures as I try to tell our stories rather than bore you with more online essays.
View all posts by ashleekiser →
This entry was posted in Friends, Ian. Bookmark the permalink.