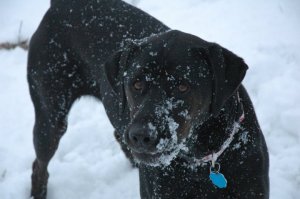 Brinn and I dreamed of the day we could have a dog together.  During my time in college, then in graduate school, we would spend evenings and weekends walking at the park while jealously watching dog owners out with their canine companions.  After our wedding, we sulked about our landlord forbidding critters of any sort of the property, and so we continued as a pet free family.  The day we bought our house, literally the day we closed on the house, we found Chaco.

After closing, we drove strait from the office to the local animal shelter.  We didn’t even

stop first for lunch.  After a tour of the puppy room, we met our little eye brow princess.  The 8 week old lab puppy had a short stubby tail and a scrape above her eye leaving her with the appearance that she had one brown eyebrow.  We immideatly fell in love and had to have her.  The shelter director informed us that the puppy had arrived just that morning, and that all dogs had to stay for at least three days before being eligible for adoption, in case an owner surfaced to reclaim his or her lost pet.  We begged to put our names at the top of the waiting list for eyebrow pup, but we’re denied since this shelter didn’t do lists.  Our only option was to be the first to request her when her probation period was up.

We returned to the shelter as they opened on the day that eyebrow was up for parole, and we got her!  We signed the forms, paid the fees, and then left puppyless because she was sent to the vet that afternoon to be spayed.  But the next day we were able to pick up our little bundle of fur.

After developing an expensive taste for water sandles, Eyebrow soon became known as Chaco.  Now I can’t imagine any other name suiting this silly pooch.  She fit into our lives perfectly and had no problem adjusting from her former life as a stray to her new life as an overly indulged house dog.

Unfortunate for Chaco, she’s not the brightest labrador to emerge from the doggie crayon 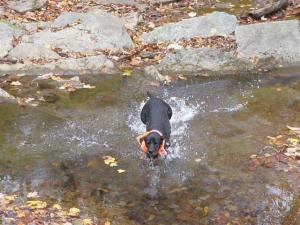 pack.  She doesn’t fetch, even a little, yet she’ll sling a tennis ball for herself and run after it for hours.  Chaco doesn’t enjoy water, either.  She’s a beautiful swimmer, and can glide effortlessly through water, but she avoids it if possible.  And finally, this duck bred dog is terribly gun shy.  But Chaco does have her perks.  Aside from her sweet personality and great potty training skills that suit her as a great house companion, she’s terribly loyal and stays right with her horses on trailrides.  But her best attribute is her attitude towards Ian.

When Ian first came home from the hospital, Chaco wanted to play!  Unfortunately his 7 1/2 pounds and lack of coordination was no match for her 50+ pounds, so we had to keep her away.  She was dying to roll him around the floor and lick out his teeth –that’s her thing.  As Ian grew in size and coordination, we allowed more and more interaction.  Finally, we completely turned them loose together, and Chaco has come to be the best baby sitter a parent could hope for.

While learning to walk, Ian would grab taller objects to pull himself up with.  Objects like

tables, chairs, human legs, and… Chaco.  Initially, Chaco remained frozen, staring nervously at her humans wondering why would allow this little man to pull on her hair and skin.  We started trying to intervene and prevent Ian from terrorizing Chaco, letting her go to our room to sleep in the bed when Ian wanted to use her as a trampoline.  As it got harder to always catch him before torturing Chaco, we resorted to treating her heavily when we caught him giving her a hard time.  Child pulling on an ear, chicken for Chaco.  Ian crawling across Chaco’s back, a slice of last night’s ham to the nurse-maid dog.

Eventually Chaco started understanding that Ian=yummy treats, so when she heard his knees thudding on the hardwood floor, she quit hiding and instead started meeting him halfway.  She would sit patiently while he pulled himself up on her fur, then she would slowly stand and ease her way to the refrigerator to await her inevitable treat.  We often joke about it, but in all seriousness, this method probably contribute to Ian walking at such an early age.  Having his own guide dog whose back was at the perfect height to rest his hands on gave him the support he needed to balance while his legs strengthened and he learned coordination.

Now as we near Ian’s first birthday, we have a very mobile little boy who has started

running and squeals with delight every time he sees a dog.  Mogwai and Chaco have taught him that dogs are his best friends and he loves them dearly.  While Mogwai was Ian’s pal in the early days, and Ian gravitated towards the sound of Mogwai’s voice as opposed to Chaco’s, now Ian’s pulled a 180.  While he still loves his Mogwai, he runs to Chaco and laughs when she answers him.  Chaco can be a real chatty Cathy.

Chaco’s favorite ways to spend her time involve lounging on the deck in full sun, running 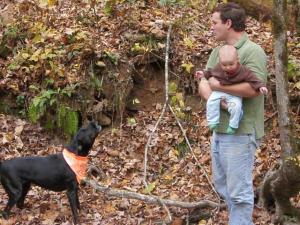 through the neighbor’s cow field after dark when it cools down outside, running up a mountain with the horses, camping at the Ocoee and chasing my grandma’s barn cats.  She speaks on command…and not on command.  She aspires to be a dental hygenist, and sits on our feet when she’s nervous.  Usually she goes everywhere with us.  We have to take an extra set of car keys everywhere we go so that she and Mog can stay locked in the car with the heater/a.c. on depending on the time of year.  Chaco strongly prefers Tractor Supply Company to Petco, and disdainfully turns down any “dog” treats aside from chicken or duck jerky.  This rotten, completely spoiled black mass of hair holds our family together, and clearly enjoys every aspect of being a dog.

“For in Calormen, story-telling (whether the stories are true or made up) is a thing you're taught, just as English boys and girls are taught essay-writing. The difference is that people want to hear the stories, whereas I never heard of anyone who wanted to read the essays.” ― C.S. Lewis, The Horse and His Boy Join us on our family adventures as I try to tell our stories rather than bore you with more online essays.
View all posts by ashleekiser →
This entry was posted in Ian, My Critters. Bookmark the permalink.