2014 kind of sneaked in on me.  2013 ended amidst head colds and RSV, which left the Kisers a bit frazzled and stretching ourselves to make it to the holidays.  I can’t believe I haven’t chronicled any goings-on since early fall!  I’ll do my best to catch up on those at a later date.

As 2014 snuck in amongst mild temps and ideal hiking weather, a polar vortex planned its sneaky path to Tennessee.  Sunday started pleasantly.  So pleasantly, in fact, that we enjoyed a nice morning at Cracker Barrel, then took our time browsing around Tractor Supply That morning.  By Sunday evening, however, the temps were dropping and the snow was falling.

Ian’s always been an active little boy with a strong desire to play outside, but the short 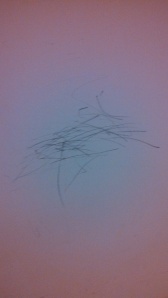 amount of daylight hours has really exacerbated his patience with the indoors.  We try to take him out as much as possible on the pleasant days, but on the eastern edge of a time zone leaves us in the dark around 4:45 pm.  Ian’s not a fan.  To make up for his time spent outside, he’s taken to prowling the house.  No where is safe!  As a direct result, Brinn and I have spent the winter building and installing shelves high out of little hands’ reach.  While working on shelving in our bedroom (because no room is safe), Brinn absent mindedly handed Ian his carpenter pencil after marking off where to hang the shelf.  We left the room briefly to retrieve the next shelf, and returned to Ian’s artistic decoration for our wall.

I loved to write on the walls as a child.  My dad’s walls are still covered with “Ashlee Renee” in many places I don’t even remember writing it!  Perhaps this is why I just don’t get overly upset with Ian drawing on the walls.  Since we have plans to repaint our bedroom walls (stayed tuned for 2014 home improvements!), and Missy gave Ian a pack of jumbo Crayola for Christmas, he and I decided to take advantage of the inclement weather to add some color to his pencil sketch.

And as we colored the winds blew, the snow fell, and all water and moisture near and on any roads froze solid.  Driving conditions became deplorable, and feeding the livestock wasn’t much better.  Our temps dipped into the single digits, then into the negatives.  Our barn building has been a slow work in progress, but we still haven’t had a chance to get a structure that will offer protection for the horses.  Since we only have the run-in shed for them, I layered the girls, and the donkey, up with multiple layers of medium and heavy weight turnout rugs, gave them an entire round bale of hay to munch on, and dropped a water trough heater into their tank to keep their water warm.  To reduce risk of colic we spread feeding out over 3 periods rather than the normal two.  Brinn set his chicken coop up with two heat lamps.  Imagine my surprise Monday morning when I walked out to find two mares and a donkey leaning against the chicken coop to share the warmth from the heating lamps!

Ian hated being left behind as Brinn and I took turns with the livestock.  We decided to take him outside for 5 minute sessions anytime that the temperature made it into the positives.  Cold as it may be, this little boy would jump up and run to the door every time we asked if he wanted to go outside.

Brinn and Ian spent today with several of the boys from the ranch.  First, Ian watched the boys sled on the quickly disappearing snow.

Then he ran around their big open house

And finally Ian brought his big brothers home with him and watched them monkey around on our very small, very shallow frozen pond.

“For in Calormen, story-telling (whether the stories are true or made up) is a thing you're taught, just as English boys and girls are taught essay-writing. The difference is that people want to hear the stories, whereas I never heard of anyone who wanted to read the essays.” ― C.S. Lewis, The Horse and His Boy Join us on our family adventures as I try to tell our stories rather than bore you with more online essays.
View all posts by ashleekiser →
This entry was posted in Family, Ian, My Critters and tagged cold weather, polar vortex, winter. Bookmark the permalink.