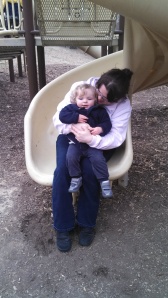 How convenient is it that Dorothy of http://thedorothychronicles.wordpress.com/, beloved friend from graduate school, experienced pregnancy the same time as I (albeit on different continents), and are raising rambunctious little boys at the same time (same continent now, but different time zones).  Since Dottie’s grandmother lives within an hour of me, it makes it fairly easy to get the boys together for playdates when Dottie and A come in for a family visit.

Preschool has put a lot of emphasis on teaching Ian to hug.  Now he runs to all people under three feet tall with his arms spread eagle ready to wrap around his “friend” for a hug.  His friend may be another child from preschool, a stranger at Rock City, or Baby A.  Unfortunately Ian hugs with great enthusiasm, and doesn’t realize what effect his rambunctious hugging has on his friends’ balance.  For one, Ian doesn’t particularly care if he goes down with his friend, and two, in the case of A, Ian has two months of age and walking experience on him.  For these reasons, Ian frequently took Alex, and often himself, down to the ground.  The other problem we encountered with Ian stems from his rough/tough/spoiled/aggressive tendencies, when he decides to shove his friend (A, Chaco, me…etc.) away, which often results in more falling.  And to add more insult to injury, Ian still wants to grab… hair, hands, coat sleeves…  We obviously have a lot of work to do with Ian’s social skills, and even more to do with his behavior when things don’t

work out his way.  I understand that toddlers have to learn proper ways to conduct themselves, but whew, sometimes it gets hard to keep up and keep insisting on good behavior.  Particularly as I tend to let Ian get away with murder while Brinn has to play the heavy…

So despite some rambunctious hugging, mean pushing, and aggravating grabbing, Ian so did enjoy having a friend his age to play with last Sunday and Friday.  He and A spent a good part of Sunday afternoon playing with A’s cool assortment of toys and taking a few turns around A’s great-grandmother’s yard.  Then Friday afternoon Dottie and I were able to take the boys to Zaxby’s for a fun lunch (complete with Ian dousing myself and the booth with chocolate milk).  From there we browsed around BooksAMillion for a bit, dreaming of all the books we’ll never have quite enough time to

read.  We ended the day taking the boys to Cane Creek Park to run around (literally RUN) and burn off all of their excess energy.

We had such a wonderful time getting to catch up while the boys played.  We tossed around rumors, like this juicy tidbit from Brinn’s cousin Misty: when boys get older, you can actually sit on the bench while they play!  Dottie and I both dream of that day.  Despite snatches of conversation

thrown over the shoulder as we ran down our respective sons before they went rolling through the forest, we were able to share some life updates and plan for future birthdays. After interest in the playground began to wane, we took the boys

for a walk around the lake.  We encountered what appeared to be the remains of a glitter explosion, lots of sticks and rocks, and vast amounts of giggling and grinning.

“For in Calormen, story-telling (whether the stories are true or made up) is a thing you're taught, just as English boys and girls are taught essay-writing. The difference is that people want to hear the stories, whereas I never heard of anyone who wanted to read the essays.” ― C.S. Lewis, The Horse and His Boy Join us on our family adventures as I try to tell our stories rather than bore you with more online essays.
View all posts by ashleekiser →
This entry was posted in Friends, Ian and tagged boys will be boys, playground fun. Bookmark the permalink.