Cancer in the Past Tense

When we move away from home to attend college, we know that we will be making new friends during the experience.  I stumbled upon Betsy during the anguish of upper division Spanish inflicted upon English majors.  We clung to one another as the only representatives of our major in this series of courses, and somehow came out on the other side with matching diplomas.  While I was fortunate to make several other close friends during my college stay, I was even more fortunate to enter the families of a few friends.  Betsy’s family is one of those few.  Betsy’s parents became part of a collective friendship that has endured even after Betsy and I went separate ways to graduate school and careers.

The Allen family are those people who always leave the door open for their friends.  I’m 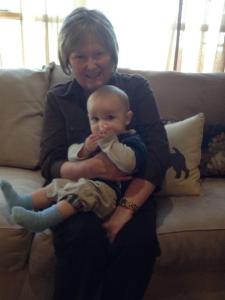 speaking literally here.  During our long drives home from the Ocoee River, they urged us to join them for dinner since their home is conveniently located halfway on that drive.  They’ve shared in my excitement with obtaining new jobs and the arrival of Ian.  They’ve offered words of encouragement for raising a child and having fun with it.  But most importantly, they’ve offered words of wisdom for maintaining a strong marriage.  I hold Jack and Connie up as the model of an ideal marriage.  They never put on any pretenses that they never have disagreements or rough patches, but they quite honestly shared some crucial advice that has helped carry Brinn and I through some of our harder times.

While I have missed Connie everyday, my heart hurts most for her sweet family.  I know that Connie no longer hurts, and eagerly awaits the rest of us, but Jack and Betsy deserve to have her with them longer than she was.  As September draws to an end, and with it the month of Ovarian Cancer Awareness, I would like to share Betsy’s message for all of us who need to practice more awareness. 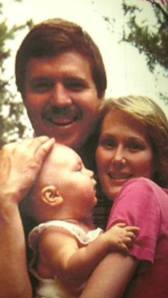 This year, one week into Ovarian Cancer Awareness Month, two days after National Wear Teal Day, and 1,625 days after her diagnosis, my Mom died. That’s the only fact I have this year. After a 4 year, 5 month, and 11 day battle, ovarian cancer took my mother.

You know this already, because you have followed our story. But if you back up from that final morning two weeks ago, when Mom and I ate SweetTarts like a communion, and later that night when Dad and I sang the Beatles and held her hands so tightly while my childhood stuffed rabbit lay beside her, you will find the three of us sitting in a doctor’s office in Nashville. It is nearly July 4th. We are minutes from entering a clinical trial. We have done everything, have searched for this everywhere, and finally something is working out. Mom is finishing some basic blood work and Dad and I are giddy and making plans. An immunotherapy trial is opening in August. Slots are open. This could be our answer. For the first time in what feels like a lifetime, we have hope. We cannot wait to contact her other doctors and support team, who have helped us search and search for a cure. We have hope, we will tell them.

And then in an instant, it is gone. The doctor is back, and telling us that the CT scan shows the cancer is now in Mom’s brain. We cannot enter the trial until it is treated. We find more wonderful doctors, we try the treatments, but it’s too late. Mom’s too sick to return to the trial. And suddenly she’s too sick to return home.

We were so close.

Mom was 54 when she was diagnosed, and had none of the risk factors for OC. Her original tumor was tested after surgery, and she did not carry the BRCA gene. The only possible contributing factor was that she had one child, not several. But that’s it, and hardly seems consequential. One March morning she went to her doctor with back pain and digestive trouble. Within 24 hours our lives were forever changed. I don’t even know how it could have been prevented. OC can grow from stage 1 to stage 3 in a matter of months. And the stage doesn’t matter as much as the aggressiveness of the cells. Mom’s were aggressive. We never fully beat it back, and likely wouldn’t have if it was caught any sooner. The only true comfort is knowing we did everything we could.

My family isn’t alone in stories like this. September is not just Ovarian Cancer Awareness month: it is also Childhood Cancer Awareness Month, and Blood Cancer Awareness Month. When October begins, it will bring awareness to breast cancer. There are so many cancers the months have to double or triple up. At each year’s Relay for Life, we see more and more luminaria bags. It is enough to feel like we are losing. But we aren’t, and this is important to remember.

We are so close.

Every day there are studies getting us closer and closer to a cure. Research is being developed. Patients are signing up for trials, knowing that while they may not get more time on this earth, they are creating it for someone else.

And the rest of us, those of us who carry on, we are here. We are the lancers, fighting alongside the heroes. We are never, ever, ever giving up, until one day we wake up and it’s over. Until one day we can talk about cancer in the past tense, like polio. As a monster that was slaughtered, thanks to the efforts of millions.

However you can, please be a part of making this happen. Because we are too close to stop now.

“For in Calormen, story-telling (whether the stories are true or made up) is a thing you're taught, just as English boys and girls are taught essay-writing. The difference is that people want to hear the stories, whereas I never heard of anyone who wanted to read the essays.” ― C.S. Lewis, The Horse and His Boy Join us on our family adventures as I try to tell our stories rather than bore you with more online essays.
View all posts by ashleekiser →
This entry was posted in Friends and tagged cancer, college friends, Connie, family friends, ovarian cancer, Ovarian Cancer Awareness, Ovarian Cancer Awareness Month. Bookmark the permalink.