So about these ponies…

So Sam and Badger have lived with us for about 7 months now. During this time, they’ve largely had a pretty cushy existence that involved occasionally carrying Ian around for 15-20 minutes at a time, and one birthday party. Until recently, it’s been hard to make the time to get out with the ponies regularly. As I’ve failed to make it a priority, Ian’s interest has waned, and he less frequently requests to go out and play with his ponies. But I finally started riding again last week. Isn’t it funny how as soon as a parent tries to do anything alone, all of a sudden her child is dying to do the same thing? 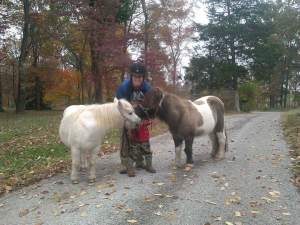 Since I’ve been making more of an effort to ride Reggie, Ian has likewise been making an effort to stop me from sneaking out the door without him. So last week, Ian and I made a trip to Lowe’s and he helped me purchase all the necessary equipment to set up some cross ties. While Reggie is easy enough to tie up to whatever surface is handy, it’s becoming a challenge to keep an eye on her while she’s tied and keep a pony tied without Ian turning the pony loose (not always on accident). While I picked out large eye bolts, Ian picked out little ones; I select large snaps for Reggie’s halter, and Ian picked out which little ones (he really prefers “little” to “small”) he wants for the ponies halters. We took it all home, cut some cheap rope to length, burned the ends, screwed in the bolts, and tied up the ropes with quick release knots. Now we’re in business.

A few times, I’ve tried to sneak out of the house to get a head start so I can ride Reggie for 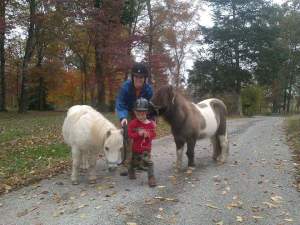 a little while before Ian joins me. Usually I have about a 15 minute window before he realizes that he’s been left in the house (or backyard), and I hear his cowboy boots clomping down the stairs as he yells “Ian’s coming to help you, Mama!” And then he runs to the gate, swings it open, and comes clomping out to me, when he’ll say “Ian wants to ride his pony.” This is about the time my ride ends. (Note: preschool is trying hard to teach Ian to use 1st person pronouns. He’s not really a big fan yet.)

I’m constantly amazed how many detail Ian notices and remembers. I haven’t taken Reggie out for a trail ride in months, but yesterday he told me with great description about “the last time” (right now everything is “the last time”) that I took Reggie for a ride down our road, and how I sat on Reggie while she walked down the driveway and out to Fairview. I can’t remember the last time I did this, but Ian does with astonishing clarity. He has also made it his life mission to get his ponies down our driveway to the main road. So yesterday, after finishing my

brief ride, I put halters on ponies, gave Badger’s lead to Ian, and gather Sam up for me, and we headed down the driveway. Ian made sure to point out every few steps that he was being a good listener and being very nice to Badger. Badger, while sneaking green bits of grass growing along the ditch line, was probably agreeing to the claims of nicety.

This week is calling for 70-100% chance of rain everyday except for Friday, so I’m not sure how much pony time we’ll be getting in, but I’m sure now that Ian will be asking more. After his bath last night, while wearing his too short pajamas (this kid just won’t quit growing!), he begged me to take him out to feed his ponies some treats. It’s a good thing the grass is dying out, or Ian may cause a founder with all the carrots and cookies we’re going through recently. If you notice a break in the weather, don’t look to hear from us, we’ll be out walking ponies down the driveway.

“For in Calormen, story-telling (whether the stories are true or made up) is a thing you're taught, just as English boys and girls are taught essay-writing. The difference is that people want to hear the stories, whereas I never heard of anyone who wanted to read the essays.” ― C.S. Lewis, The Horse and His Boy Join us on our family adventures as I try to tell our stories rather than bore you with more online essays.
View all posts by ashleekiser →
This entry was posted in Ian, My Critters and tagged autumn, busy life, Children, cowboy boots, Ian, ponies, Shetlands. Bookmark the permalink.