As winter considers belching one more cold front before spring officially rolls in next week, the Kisers are healing up and almost ready to resume our normal lives. For the past four months, we’ve been tiptoeing around our usual activities as health issues interrupted our regularly scheduled broadcasts. The first issue occurred back in November with my car accident. What we initially thought to be extreme soreness showed up on an MRI to in fact be a bulged disc in my neck. So while it’s been a pain in the neck (pun fully intended there), it has been a relief to actually have a diagnosis so we could chart a plan of treatment. While I’ve been rehabbing my weak neck muscles to better support my poorly functioning disc, Brinn has had his own fun with nerve surgery. After carpal tunnel and ulnar nerve surgery, he’s joined me for my tri-weekly physical therapy sessions. We’re just such a sweet couple that we enjoy sharing everything, even our physical therapist.

Timing wise, we probably picked a fairly convenient winter to kick off. The weather has been mild, almost too mild. There’s not been a whole lot of water for paddling, nor much snow for sledding or skiing. At least we don’t feel like we’re missing a whole lot this year. It probably has been one of the better winters for riding, especially as the roads have stayed clear for trailering out to trail rides, but Reggie hasn’t seemed too upset to continue her tenure as a full-time pasture pet.

It’s looking like we may actually get a little bit of winter weather this weekend, and I suspect this will be old man winter’s last big hurrah for the 2016/17 winter season. This suits me just fine as I believe that we have almost turned the corner towards recovery. Brinn’s doctor has finally released him to slowly resume normal activity, within reason. I’m not sure that this doctor really understands that Brinn rarely participates in reasonable activities, but she did emphasize to him the risks that he takes if he pushes too hard too fast, and she did recommend that while paddling something tame in the funyak with Ian should be okay, she did advise that he avoids guiding any Ocoee trips for the next few weeks. I have another few weeks of therapy to look forward to, and then I get to undergo evaluation to see if I’m improving. Hopefully at that time, I’ll dazzle the socks off my therapist and doctors and they’ll all agree to release me back to a normal life.

In the meantime, we’ve found a few different ways to entertain ourselves over the last few months. Aside from feeding Reggie and her minions (can you believe that she still wants to eat everyday, even though I’m not riding??), we’ve been able to enjoy a few meals with our MSR family.

Ian has probably stayed busier than Brinn and I put together these last few months.He’s

halfway through his semester in gymnastics at the Little Gym, and still faithfully chasing his chickens around the yard everyday. Black Chicken still remains a very nice (not black) rooster and let’s Ian catch him without spurring him, but here lately even the hens have been letting Ian catch them. I’m not sure if they’ve just given up, or if they’re not as nervous as they used to be. Either way, everyone is laying and no one is flogging, so we’ve not had any fresh soup stock in a while.

Last week, we decided to load up on Wednesday to go see some of our friends for the evening and check out MTSU to see what their weekly roll practice is all about. Holy moly! This place was awesome! I mean, yeah, it was cool to hang out with our friends and other boaters, but the slide! Their pool has a giant water slide that the lifeguards turned on for Ian. Then Brinn and Wes took turns standing at the bottom to catch Ian every time he came flying off the end. I think this does still count as developing kayaking skills because Brinn worked on river signals with Ian to

communicate, and Ian couldn’t start down the slide until he used his signals to verify that his catcher was in place. Parents take note, this may be the best pre-dinner activity on the planet for children. After leaving campus, we joined the group for a quick dinner at one of their local haunts. Ian brought his blanket inside, curled up on one bench of the booth beside our table, and promptly slept through the entire meal. Brinn and I had an entire meal with our grown-up friends to enjoy doing nothing but eating and gabbing. I’m pretty sure we’ll be attempting to repeat this scenario soon. Despite Ian’s obsessive fascination with the slide, we also had other entertainment in place at the pool, including watching Sarah climb inside Ian’s teenie tiny Fun1 kayak and squirt it around the pool (suggested weight range 30-80 pounds; Sarah’s weight? Probably around 110 pounds). Even Todd took a go at the kiddie kayak.

In another news, Ian also spent an entire week of sleeping on the floor. Blanket forts not being elaborate enough for the experienced outdoorsman, Ian kept half the living room tied up with a tent for a full week-long. Mogwai and Chaco were not thrilled with the sleeping arrangements of this indoor adventure, as Ian insisted that they join him in his tent every evening. Finally the nights grew cold enough again that we needed to resume using the wood stove, so the fabric sleeping shelter needed to safely return to the closet. Thankfully Ian has not asked to pull it back out again over the last two weeks.

Hopefully recovery time is right around the corner. The rains are coming more steadily now, filling the creeks a bit more these days, and some warmer days have turned loose the hair on Reggie and Badger. They’re both due for some pretty heavy-duty groomings and some major trotting sessions to help jiggle away their winter pounds. The Ocoee begins running again next week, and our hometown Muddy Rivers Festival takes place just one week after that. We’ve got a lot of springtime activities to look forward to! 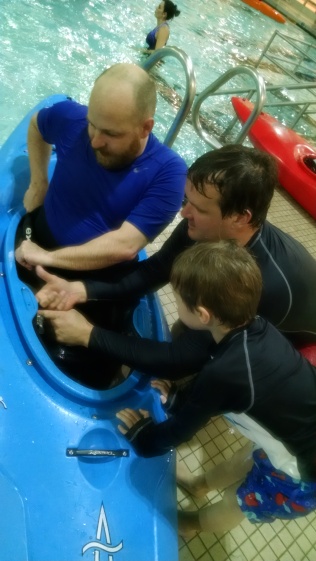 “For in Calormen, story-telling (whether the stories are true or made up) is a thing you're taught, just as English boys and girls are taught essay-writing. The difference is that people want to hear the stories, whereas I never heard of anyone who wanted to read the essays.” ― C.S. Lewis, The Horse and His Boy Join us on our family adventures as I try to tell our stories rather than bore you with more online essays.
View all posts by ashleekiser →
This entry was posted in Family, Farm Life, Friends, Ian, My Critters, paddling and tagged 'Boro Kayaking, Badger, Brinn, Chaco, chickens, Fun1, Ian, indoor camping, Mogwai, physical therapy, Reggie, rehab. Bookmark the permalink.

1 Response to Healing and Recovering