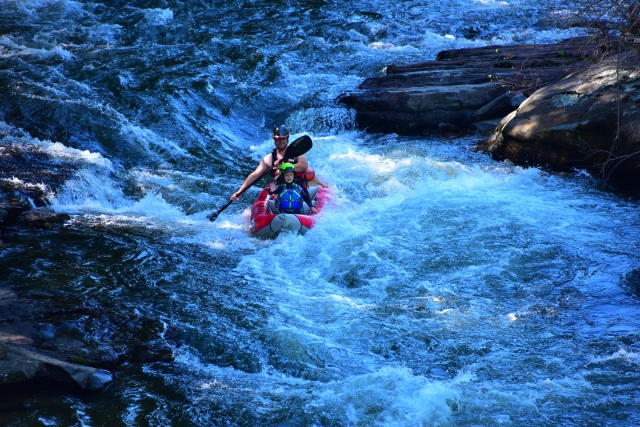 This entry is not meant to be a substitute for common sense, or a treatise on child care. The purpose is to provide suggestions as what has worked successfully for my family and friends who have ventured into the water with their kids.

So here are the five rules Ian has trained us to follow with him on whitewater:

This is the absolute most important rule in our family. No one is going to have any fun if there are injuries or major scares. For us, this means that we have to have the right boat (See the last post on how we decided on the correct boat for Ian), which often means taking the raft the first few times on a new run or a bigger run, and taking the funyak on runs Ian has become comfortable with. This also means that sometimes we get out and walk around certain rapids with Ian, depending on the cfs and how Ian is feeling that particular day. Some trips he wants to run the Grunch on Clear Creek, while other days he asks to walk around instead, or Brinn makes the decision for him. We never want to push him to do something he’s not comfortable with, so anytime he asks to avoid something, that becomes the priority. And finally, safety first means that we all have to have the right gear: helmets, PFDs, and footwear for every trip.

When we first introduced Ian to flat water in the canoe, we began making him wear a 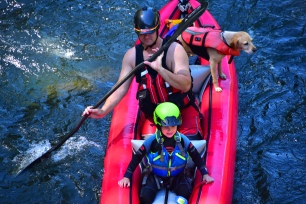 helmet, and believe me, he was not a hat kid. He absolutely refused to wear cute little sun hats for pictures as a baby, and as a toddler he had no interest in wearing a ball cap. We knew that getting him to wear a helmet in whitewater was going to be a beast, so we started with flat water and just made it part of his water ensemble. If he wanted to go out on the lake to float and swim, he had to wear a helmet, end of story. This helped the transition to white water go so much more smoothly because by the time he was two, he’d become accustomed to always wearing the helmet. A lot of parents don’t require their child to wear a helmet when they’re in an open boat, but Brinn is not very negotiable on this safety feature for Ian, especially since our squirmy little dude sometimes forgets to brace in and we’re always worried that he might roll out of his boat and into some rocks. On a class II trip down Nantahala this summer, I forgot to toss our helmets in the raft before Brinn left with the jeep to set up shuttle.  I still hear about this transgression frequently, and believe me, I have not committed a repeat offense.

Brinn always insists that we wear our helmets with Ian –even in the raft on class 2 runs, because he feels that it’s important to model safe behaviors. Along with always wearing our helmets, we always insist on well fitting PFDs that go on before getting near the water. If Ian wants to play in the water at the put in while we’re getting ready to paddle, that’s great, but he’s going to have a PFD on the entire time. He’s also going to have on paddling footwear. During hotter months, we make the occasional exception to shoes and let him wear Chacos, but most of the time, he’s in closed toed and closed heeled NRS booties. While Ian’s been lucky to avoid a swim so far, we all know it’s coming at some point, and we want him to be as protected as possible from rocks.

In our experience, if a ki

d is not comfortable, then no one is going to have any fun at all on that trip. For Ian, this is all about keeping him warm. He’s just as cold natured as his mama when it comes to the water, so even in July he has to have plenty of layers on the Nantahala. What has helped us to get familiar with Ian’s comfort levels regarding temperature, and be prepared for temperature changes. For hot, sunny days, we keep him in a thin rashguard and leggings with UV protection to keep him co 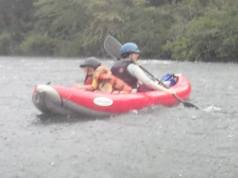 ol and protect him from sunburn. If we’re going to a dam controlled release, we’re going to be layering this kid up. We always take extra layers in a dry bag to add or change into just in case the weather changes. A wetsuit in July has proven to be our best friend during the sudden monsoon that blew up on the Hiwassee last year that left most of the adults in our group freezing, yet Ian’s core stayed warm and kept his complaints at minimum during the deluge.

This year we’ve seen a direct correlation between Ian’s level of bravery and the number
of layers he’s wearing. During our 2016 Nantahala trips, Ian tended to spend most of each trip sitting on a thwart in the middle of the raft. He enjoyed the trip, but he did not particularly care for the mind numbing cold of the splashes. This year, we’ve added fleece underneath Ian’s wetsuit layer, and spray gear on top of that. Now he’s gone from sitting near the middle of the raft, to leaning over the bow of the funyak to take the waves head on. Huge difference!

We always try to eat a good meal full of protein on our way to the river, but it never fails

that within 5 minutes of putting on the water, Ian always pipes up with “I’m hungry.” Every. Single. Time. We’ve learned that the best way to insure a happy and agreeable little boy on the water is to pack as many snacks as we can possibly carry. This past spring, Wes and Rachel even got Ian his own little dry bag, so now we let Ian help refill his dry bag before every paddling trip. The extra benefit is that by keeping Ian’s bag filled with more than he can possibly eat in one trip, he has extras to share with friends and if we happen to forget snacks, there are usually some leftovers from the last trip still in the dry bag buried in one of our gear bags. I also make it a habit to keep an Ian snack and in my pfd pocket. Having snacks handy can absolutely make the difference when your little dude or dudette is about to go into full meltdown mode. It’s amazing to see a cliff bar fly into action and soothe a charged scene. 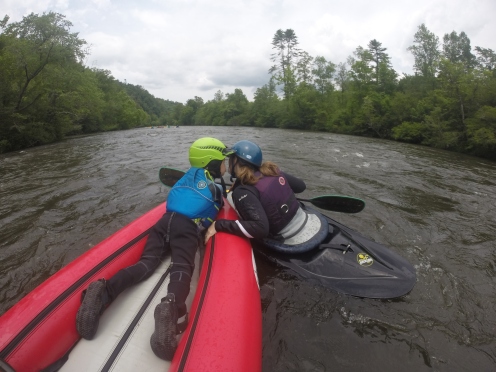 Ian enjoys riding over rapids, and he enjoys spending time on the water with his parents and Mogwai, but some days he’s not feeling the vibe as strongly as others. Those days usually find an excessively tired little boy who may not have slept well the night before or a cranky kid in the middle of a painful growth spurt. Either way, sometimes he just wants to be grumpy. The addition of friends close to his age transforms his attitude and

experience. Not only does Ian have more fun by sharing the experience with friends, but he also builds on their enthusiasm. Small rapids that he found boring are now fun again when he gets to see a small friend laugh about the splash. Bigger rapids that used to be intimidating become exciting after seeing an older friend ride the bull through them.

We have to remind ourselves that no matter how well we prepare the situation, sometimes nothing will run to plan and small children just can’t hang. The hardest part of paddling with my kid along has been learning that I can’t control everything about the trip, and sometimes we’re just going to have to change our plans, especially at the last minute. This past July we put on the Nantahala for an exciting day on the water. Our group was outfitted with throw ropes, safety boaters, and variety of water vessels including rafts, slices, kayaks, and funyaks. Ian was dressed with fleece and polypro base layers, hydroskin pants, jacket, and socks, his NRS splash top and splash pants, booties, and his WRSI helmet. His dry bag was filled with applesauce, cliff bars, capri suns, and a secret candy bar. Our day began to a great start, then Ian began to fatigue.

As Brinn and I watched Ian begin to droop, we made the choice to split off from our

group and travel at a faster pace towards the take-out. Unfortunately we just didn’t make it, and I ended up taking out at the ramp above Nantahala Falls. Brinn jumped in my demo boat to paddle it back down to the NOC and pick up our jeep while I stayed at the ramp with a sleeping Ian. We’ve had some Hiwassee trips like this as well. When kids get tired, they’re tired, and there’s just not much to do about this except let them sleep. It means that sometimes our trip is cut short, or our time with the group is limited, but that’s okay. Because at the end of the day, we still got to spend some time on the water as a family and that’s what our priority has become these days.

“For in Calormen, story-telling (whether the stories are true or made up) is a thing you're taught, just as English boys and girls are taught essay-writing. The difference is that people want to hear the stories, whereas I never heard of anyone who wanted to read the essays.” ― C.S. Lewis, The Horse and His Boy Join us on our family adventures as I try to tell our stories rather than bore you with more online essays.
View all posts by ashleekiser →
This entry was posted in Family, Ian, paddling and tagged Aire Rafts, Aire Tomcat, boating, Children, dbp_4_life, Ian, white water kayaking, white water rafting. Bookmark the permalink.