Land of the Midnight Sun, Alaska Part I 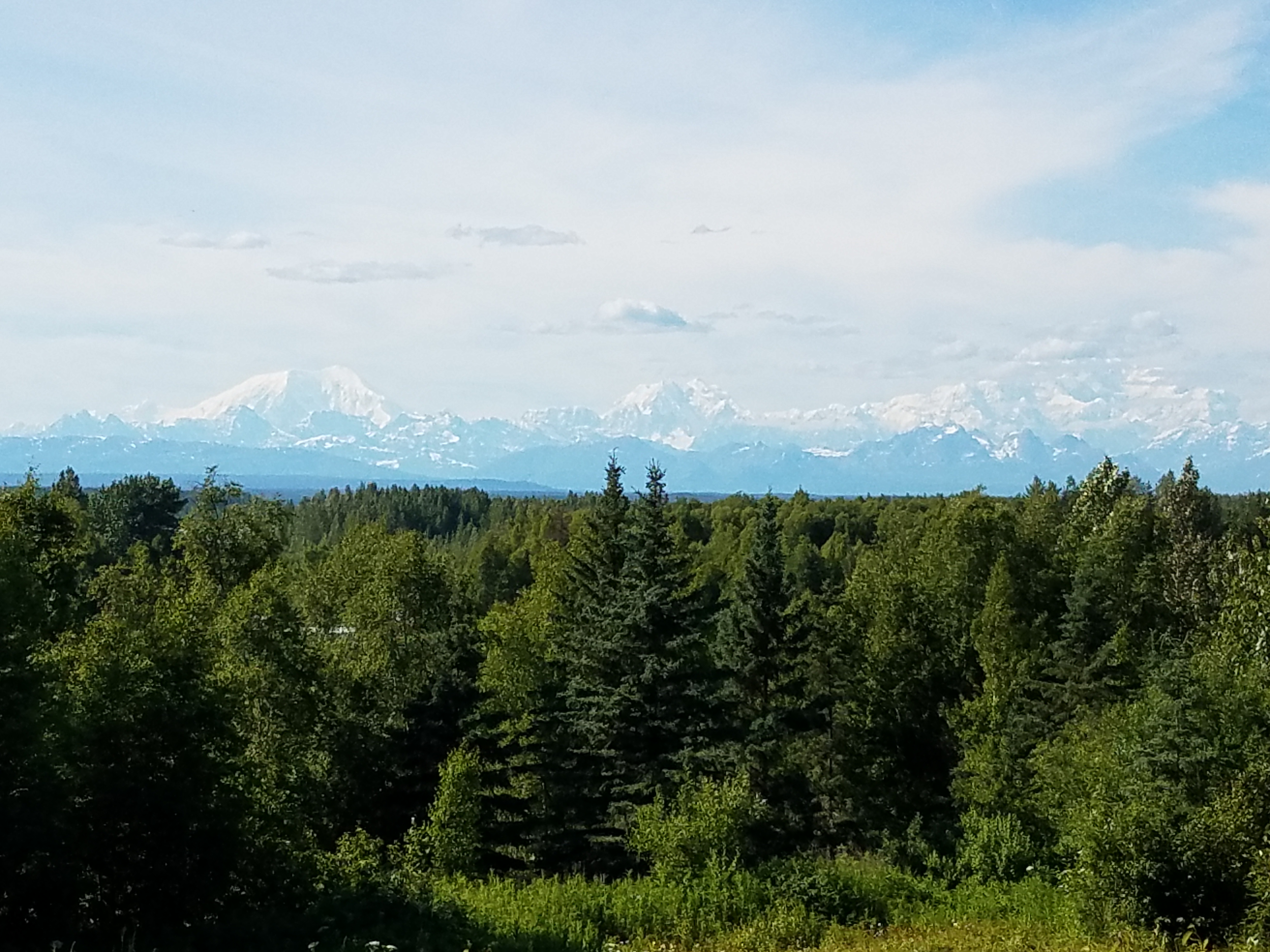 Upon arriving in Alaska, we spent a very, very brief night in Anchorage. We were warned to expect 24 hours of daylight in Alaska, but my research indicated that this was only true in the more northern reaches of the state. Landing as far south as Anchorage, I read that we should expect closer to 22 hours of daylight. With a 10:30 PM arrival, we were thrilled to still have full light to navigate our exit from the airport as we settled into an unfamiliar car while driving Anchorage’s roads to locate our hotel for the night. The daylight really made the process so much easier as we were all exhausted. At home it was 1:30 AM! Our plan was to check-in and be in bed by midnight. I figured that we could sleep until 8:00 AM and get a full 8 hours before starting our Alaska adventure. At this point the sun looked about like it does around 6:00 or 7:00 in the evening at home.

After I finally wound down enough to drift off to sleep, it seemed like it was only 10

minutes later that Brinn was shaking me awake and garbling about sleeping late. The sun was directly overhead and shining brightly, and thus began the longest day of my life. I dressed and repacked in record time while Brinn got Ian ready and my dad showered. We were out the door within 30 minutes and headed to Wal-Mart to make a planned stop for supplies. Our initial plan had been to wake up by 8:00, find somewhere to eat, hit Walmart by 10:00, then begin our long trek up to Denali. Feeling that we were already behind, we rushed straight to Walmart to purchase a cooler along with drinks, snacks, and ice to sustain us during our journey. When we arrived at the Walmart Supercenter closest to our hotel, however, we found the first door looked with a sign to enter on the other side of the store. We all thought this was odd, but maybe they get a slower start in Alaska than they do in TN? The three of us started to walk down to door #2 while my dad headed to go move the car closer to door #2…in a very empty parking lot. At this point he calls out to us, “I don’t think it’s 8:00.” I check my phone, and realize that the signal has gone crazy and the time zone seems to be stuck somewhere near Japan. We enter door #2 and ask the greeter what time it is. He patiently points to the clock right in front of us and shares that it is almost 6:00 AM. SIX O’CLOCK IN THE MORNING!! This is the day after we left just flew THOUSANDS OF MILES across two countries! At this point we all stare at Brinn who sheepishly volunteers to go find mosquito nets and fishing supplies. So now at this point we’re running extremely ahead of schedule. 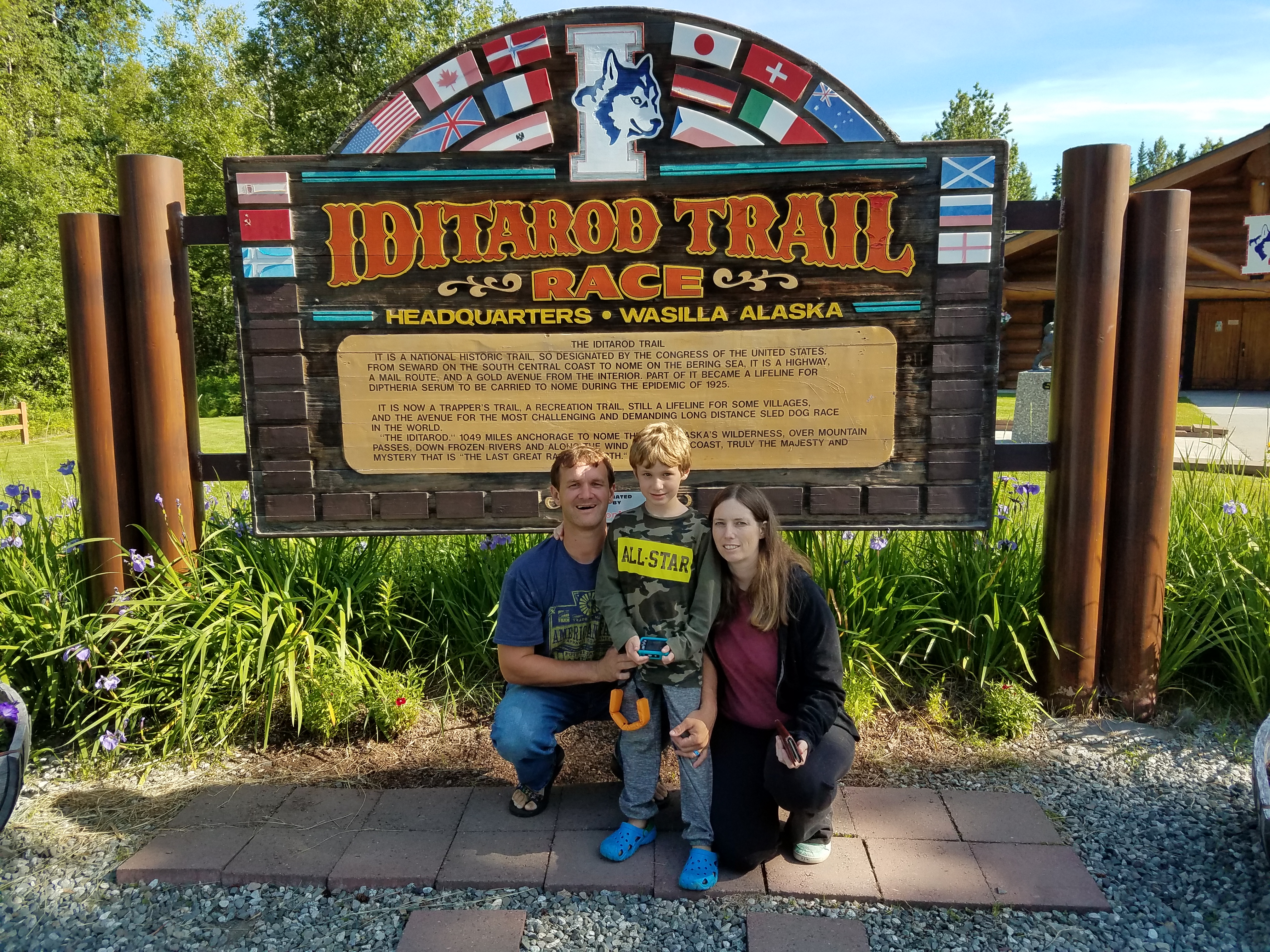 After a groggy jaunt around Wal-Mart, we moseyed over to the nearby Denny’s for some much-needed breakfast where we discussed our itinerary. Originally, I had planned for this first day to consist only of gathering supplies and making the long drive to Healy where we had a cabin reserved for three nights. After the third night, the plan was to make our way back south, stopping in Talkeetna for an aerial tour of Denali, and then coming down to Wasilla for a couple of days. Upon checking the weather, however, we discovered that our flight day was forecast to be overcast and drizzly. Since we had such an early unexpected start to our day, we called the flight company, who happily changed our flight from Friday to that Tuesday. The only catch: we’d have to wait until 7:00 PM to be able to all go fly together. Talkeetna was roughly two and half hours from Anchorage, so we now had a little over 10 bonus hours for our day. We quickly decided to hit our Wasilla stops on the way up to Talkeetna and enjoyed a very touristy day killing time.

Our first post breakfast stop found us at Peter’s Creek. We stumbled on this small park

right off the Glenn Highway in the Eagle River area. Brinn noticed a pretty creek running under the highway and saw a good area to pull over, and from there we identified a parking lot. We followed the trail for a little while, and then opted to hike up the creek banks to do a little scouting. The rapids were smallish class IIs, but it still looked like it would be a fun run. Unfortunately we didn’t get an opportunity to talk to any local boaters about anyone running this creek, but we’ll add it to our list for when we go back.

This is where we first encountered Cotton Wood trees.  This odd tree grew a white fiber that strongly resembles cotton, but shed worse than a crepe myrtle! At time it felt like we were walking through a very warm snowstorm. Our clothing quickly furred up, and we looked like a lint filter had exploded on us, but we all relished the opportunity to stretch our legs. 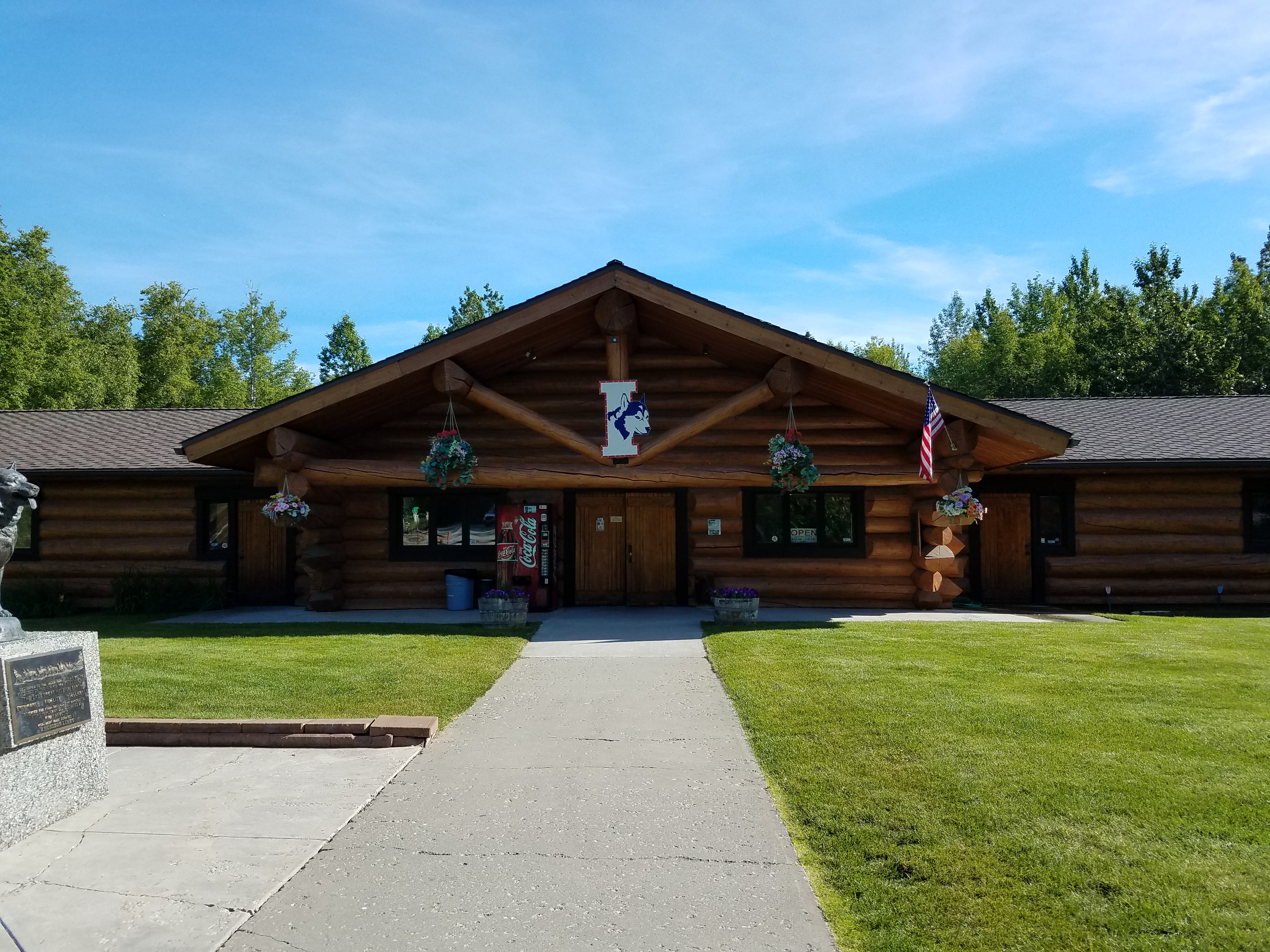 After leaving Peter’s Creek, we pushed on to Wasilla and decided to tour the Iditarod Sled Dog museum. Rather than spend time viewing the exhibits, Ian wanted to see the dogs. One of the staff members came into the gift shop while we were checking out with a few purchases to let us know that there was a tour bus on its way. She encouraged me to take Ian outside to see the new litter of pups before the crowd arrived. We followed her out to the kennel, and she promptly filled Ian’s arms with tiny fluff balls. Ian, obviously, was quite taken with the puppies and reluctant to turn them loose. Fortunately I had just bought him a small plush replica to encourage him to turn loose of the real deal. Surprisingly he found the knock off satisfactory, and I didn’t have to refinance my house to be able to afford a pedigreed puppy whose mama had run in the Iditarod race. Despite Ian’s easy agreement to give the puppies back, a seed had been planted. I didn’t realize it in the moment, but Ms. Redington initiated a powerful fascination that gave over to a full obsession by the time we left.

After the tour bus pulled in, the kennels did become very crowded, so we moved over to the working dogs where we had the opportunity to ride in a wagon behind a few of the dogs. Some of these dogs had actually raced just this year! I couldn’t believe how excited the dogs were to pull us. They were yipping and jumping the entire time we loaded the wagon. Once their handler called for them to go, they were off like a shot. It felt a bit like careening wildly through the woods in a go-kart.

Ian struggled to come up with a name for his new plush husky, so I (a true 90s kid) suggested Balto. I had tried to encourage Ian to watch Balto a few years ago when it was on Netflix, but he had absolutely no interest at the time, so obviously he didn’t remember the movie I was talking about. Later that week, I loaded Balto on his Kindle, and it became his favorite movie during our trip. After his second or third viewing, he decided that his new plush puppy looked exactly like Balto’s nemesis, so he named his dog Steele. Steele has risen to prominence in Ian’s life, and now ranks higher than Greenie the bear. Steele participated in almost every excursion through Alaska, and now sleeps beside Ian every night. 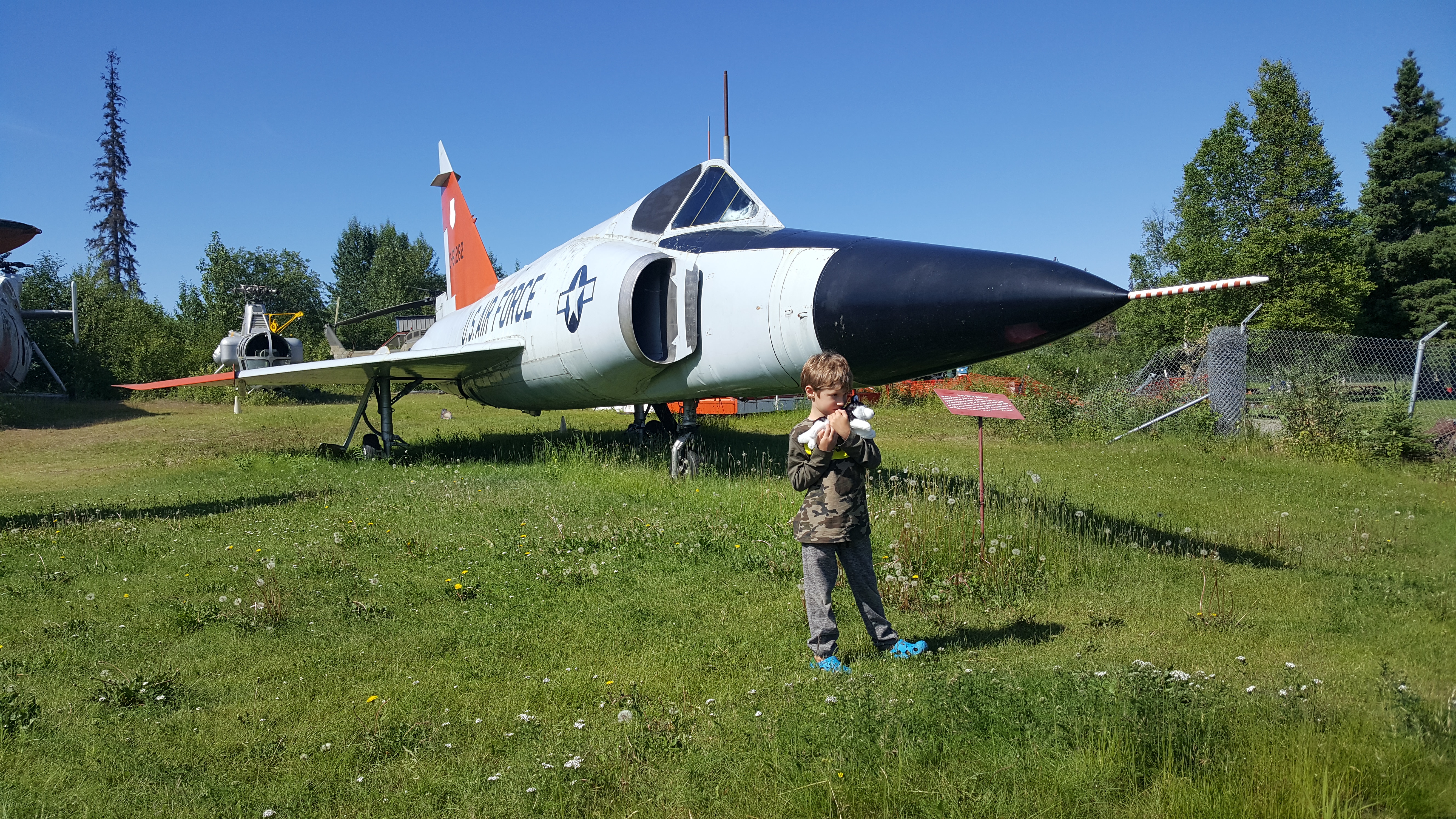 With Steele at Ian’s side, we were on to our next Wasilla stop: the Museum of Alaska Transportation and Industry. What we expected to be another small operation turned out to be a largely outdoor venue that covered several acres. We began our tour indoors and viewed quite a few traditional museum exhibits with information about the earliest forms of transportation in Alaska in its early days of settlement, then we worked our way outside to the big toys. This place was every little boy’s dream. Literally full of planes, trains, and automobiles, we also encountered farming machinery, rescue equipment, and helicopters. This destination was well worth the stop.

At this point our early start after a long, late day really started to catch up with us. We

stopped for a late lunch, then began to head north again. Needing some rest, my dad pulled into Willow Creek State Recreational Area to enjoy some pretty scenery while he caught a quick nap. Ian settled into watching a movie with his new puppy, so I followed Brinn as he lugged his fishing gear down a trail to the river. Here we marveled at the giant king salmon

jumping right out of the water to flip around in the air. Anglers were not allowed to fish for the kings while we were there, but Brinn still had a good time trying (and failing) to interest other fish into biting on his line. I had the chance to rest my tired feet, still a little puffy from the flight, and soak in the majesty of our view. Several people had warned us that Anchorage is just a city like any other, and you really had to get out it before you could really see Alaska. Willow Creek gave us our first opportunity to really begin seeing Alaska in all its glory. 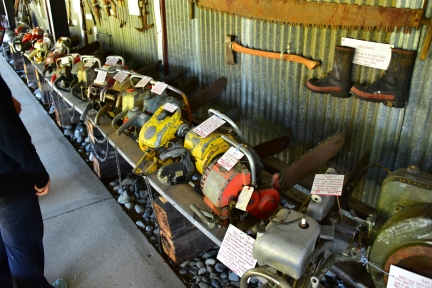 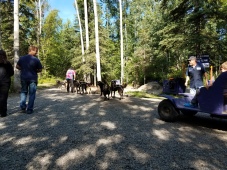 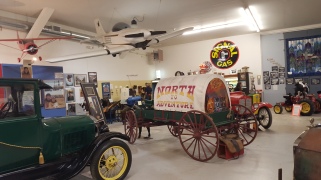 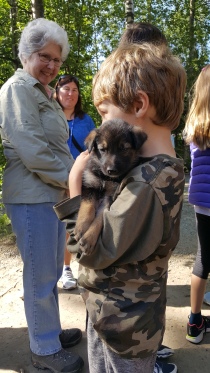 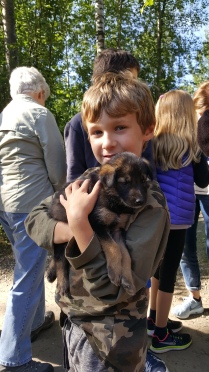 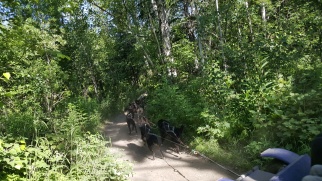 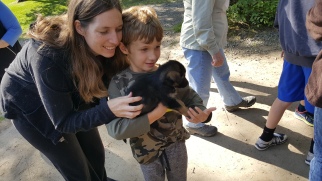 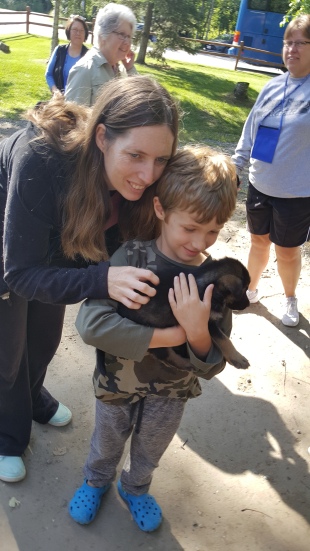 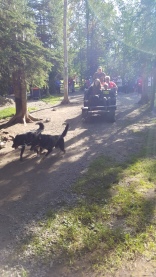 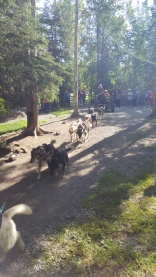 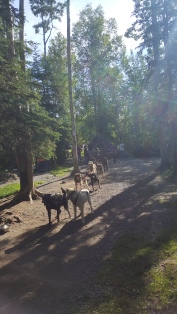 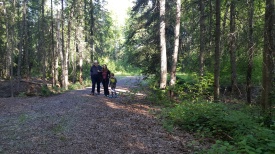 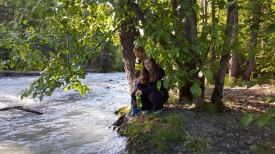 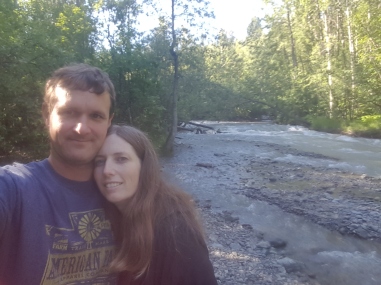 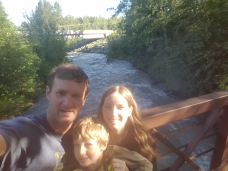 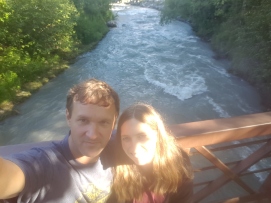 “For in Calormen, story-telling (whether the stories are true or made up) is a thing you're taught, just as English boys and girls are taught essay-writing. The difference is that people want to hear the stories, whereas I never heard of anyone who wanted to read the essays.” ― C.S. Lewis, The Horse and His Boy Join us on our family adventures as I try to tell our stories rather than bore you with more online essays.
View all posts by ashleekiser →
This entry was posted in Family, Ian, My Critters, Outdoor Adventures and tagged Alaska, Balto, Eagle River, Iditarod Museum, Museum of Alaska Transportation and Industry, Peter's Creek, Sled Dogs, Steel, Wasilla, Willow Creek State Recreational Area. Bookmark the permalink.