From Badger to Promise 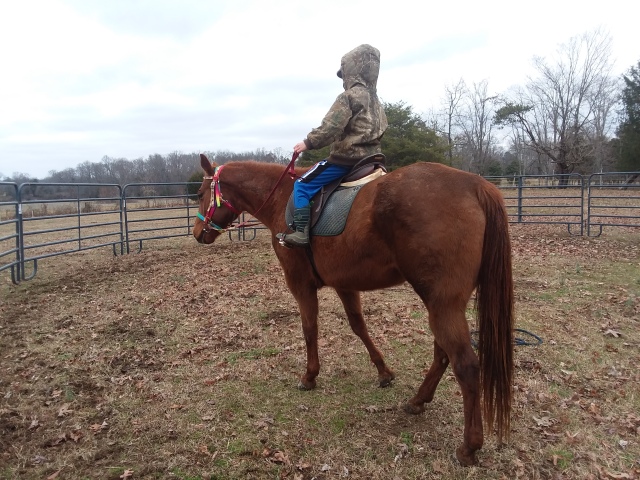 I had the absolute best part time job during college: playing with babies at Golden Opportunities Farm, a quarter horse breeding stable 30 minutes from my college campus. My duties included getting baby horses comfortable with being handled and some very light training activities. While at this job, I met two very important gals:

Cori and Promise have earned quite a few AQHA points together, then Cori switched gears and started her own breeding program. Now her boys –including Promise’s colt, Arrow– are all grown up and ready to start their own show careers.

So all this backstory contributes to happenings around my small farm a few months ago.

Ian has been more interested in riding with me lately, especially since one his best friends has been coming out to ride Reggie. The two would like to ride together some, but Badger seems to have reached his rider weight and height limit this winter. Ian tacked his pony up one afternoon while J was riding Reggie in the round pen. He jumped on his pony… and then proceeded to sit in the middle of the ring for J’s entire ride as Badger refused to move. The next weekend, I ponied Badger off of Reggie so Ian could ride with me around the field. After we started a very slow second lap, Ian asked if I could get him a bigger pony. He loves Badger, and has made me promise that we would never sell him, but he is getting a bit frustrated that he can’t really ride him any longer.

A few days later, I shared this encounter with Cori while we were exchanging texts, and she asked if Ian would be interested in a Promise sized pony. Now, Promise is nowhere near pony-sized, but her temperament does make her suitable for a small, inexperienced rider. I asked Ian if he’d like to move up to a full sized horse, and then we took a Saturday to visit Cori and Promise for a test drive. 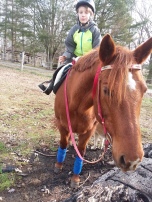 has a safe mount while he’s still learning to ride. He’s still not a horse crazy kid by any stretch, and makes it very clear that he’s not a horse-person –he’s a husky person– but he does enjoy riding with me and he loves Promise. He has trouble believing that I knew Promise while she was still a baby, but he is very excited to have his own horse to run out and catch when he sees me bringing Reggie in for a quick ride. Between Balto and Promise, it looks like red is turning out to be Ian’s color!

“For in Calormen, story-telling (whether the stories are true or made up) is a thing you're taught, just as English boys and girls are taught essay-writing. The difference is that people want to hear the stories, whereas I never heard of anyone who wanted to read the essays.” ― C.S. Lewis, The Horse and His Boy Join us on our family adventures as I try to tell our stories rather than bore you with more online essays.
View all posts by ashleekiser →
This entry was posted in Farm Life, Friends, horses, Ian, My Critters and tagged AQHA, horses, Ian, Promise, riding. Bookmark the permalink.