It’s been half a year!

Ian’s funnest age so far is definitely the six month mark.  This little boy is so full of grins and giggles now, and has just started reaching for us.  There’s just not much to make you feel better inside than for a little boy’s face to light up when you walk in the door, then have him reach his arms out and squeal.  I wish I could say that Ian did this first for his mommy, but nope, it’s all about his doggies.

Initially, Mogwai would smile when he would see or hear Chaco.  Ian’s always had an ear for voices, and not only could he distinguish between Brinn and myself speaking, but he could also tell the difference between Chaco and Mogwai’s voices.  While he would smile for Chaco’s barks, Ian would become so overwhelmed with giggles over Mogwai’s braying that he would begin snorting.  Now that Ian’s hit the six month mark, he’s gotten just as excited about Chaco, and grins and giggles for her as well.  Fortunately, Chaco has always been a pretty chatty girl, and will speak on command.  When Ian gets a little fussy from boredom, we can depend on Chaco to talk to him and entertain him until his mood lightens.  What’s really funny is that Mogwai, who typically only speaks when he has a squirrel up a tree, is now started to speak on cue –only when Ian’s around, however. 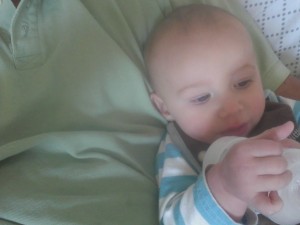 Another fun thing that occurs at six month is an even bigger push for independence.  While Ian is still a wonderfully snuggly baby, he’s completely happy to hold his bottle while eating.  This has had amazing results in our home.  Dishes make it to the dishwasher in record time.  Clothes can be folded as they come out of the dryer rather than sitting in a basket for three days.  It’s amazing how much you can get accomplished in the five minutes he spends with a bottle. 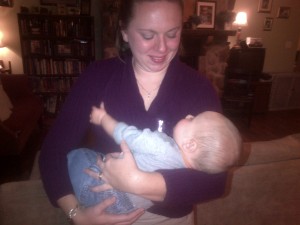 So far Ian hasn’t met a stranger.  He’s completely trusting of almost all people, and will sit contentedly with almost anyone.  A couple of weeks ago Ian and I traveled back home to East TN to visit a friend for her surprise 30th birthday party.  Ian was delighted to find himself passed from person to person.  He thinks new people are great, as their arms haven’t yet gotten exhausted from helping him “bounce” incessantly.

As far as the bouncing goes, Ian tends to either be an on/off child.  He seems to get this from his father.  If Brinn sits still and remains quiet for more than 5 minutes, he’s usually out like a light.  Ian’s following in this pattern.  When he’s tired, he will move constantly in his valiant effort to prevent sleep.  He never wants to risk missing out on anything.  When he does get still, it doesn’t seem to matter where he is, or who he’s with, he goes down hard and fast.  This had made traveling home to my grandma’s house so easy for both of us.

While Ian still loves to go for his stroller rides, he’s all about sitting up and looking around now.  The sides of his stroller tend to block his vision around the sides and behind him.  Ian likes to crane that neck around and investigate everywhere around him.  When our new neighbors moved in a couple of weeks ago, we couldn’t push the stroller and pull the wagon full of kitchen items we were taking over, so we just plopped Ian in the wagon with his bumbo chair.  He totally thought this was the way to travel. 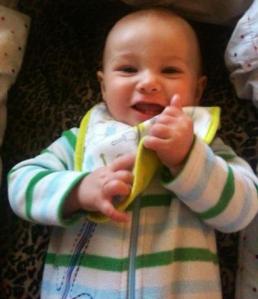 More than anything else, the best part of Ian’s six month stage have been his grins.  He loves to smile!  My grandmother, who tends to be a bit of cynic at times, even remarked one night, “you’d think he could find something to get upset about.”  While Ian can have his moments, for the most part he stays happy and giggly.  He smiles when you pick him up in the morning, and smiles in his sleep when you put him to bed at night.  I love my giggly, smiling, raspberry blowing six month old baby.

“For in Calormen, story-telling (whether the stories are true or made up) is a thing you're taught, just as English boys and girls are taught essay-writing. The difference is that people want to hear the stories, whereas I never heard of anyone who wanted to read the essays.” ― C.S. Lewis, The Horse and His Boy Join us on our family adventures as I try to tell our stories rather than bore you with more online essays.
View all posts by ashleekiser →
This entry was posted in Ian. Bookmark the permalink.