Ian celebrated his first Thanksgiving last week!  We had a big day of friends, family, and food!  The day started with a mad dash to do a quick once over on the house to try to make it presentable before family started arriving, but we had to pause in the middle once Ian woke up.  He was ready to play!

I managed to prep most of the food in the days leading up to Thanksgiving, so mostly it was just a matter of cooking them the day of, rather than assembling and cooking.  Brinn took care of the turkey by putting it in the smoker.  Grandma always prepares the cornbread dressing.  My dad had to bring dessert to save the day.  I neglected to do my shopping early enough this year, and my grocery store was completely sold out of pecan pie!  Normally I try to make all the desserts, but this year I had a 15 pound distraction.

You can see my dad and Preston standing there by the punch bowl.  This is the best punch on the planet, hands down.  It beats to heck that scary green stuff you get in the jug.  Grandma’s been making this punch as long as I can remember.  It’s the first thing she did when she arrived last Thursday.  After making punch, she had to advise Preston in the art of making devilled eggs.  He’s a huge fan, and thinks no holiday meal can be complete without them.  Since I hate eggs in any form, and had plenty enough to do already this year, his only options this year were to make them himself or go without.  He opted to make the eggs.

The only problem is that Preston can sometimes get a little distracted.  After informing me

that my music (late 90’s alternative rock) is not “family friendly,” and having me change Pandora, he wandered into the living room with his bowl of egg yolks to discuss Tony Rice with our Aunt Connie while he mashed and mixed yolks with mustard and mayonnaise.

Sam arrived somewhere in the middle of all the chaos.  He’d been out hunting with one of Brinn’s friends that morning.  Unfortunately he didn’t see anything while he was out.

Our pediatrician has urged us to feed Ian the same foods that we eat, just smushed up finely, of course.  His advice is that kids are going to have to eat what the adults eat eventually, so why not help them start developing a taste for it as soon as possible so that they will be less picky at dinner down the road.  Since I roasted a cushaw to puree for a cushaw pie, I had plenty of spare smashed up cushaw, so Ian had himself some cushaw for Thanksgiving.

Mogwai, if you remember, has food allergies, so he rarely gets food from the table.  As a cur dog, he also has major issues keeping weight on.  Right now, however, his weight has been holding up really well.  But once the turkey came out of the smoker, my nice medium weighted Mogwai started showing ribs and his eyes grew about 2 inches in diameter.  Clearly you can see that he was absolutely famished and must have turkey to survive another moment.

As hard as Ian tried, he just couldn’t stay awake through all the excitement, and had to pause for a quick nap in the middle of dinner.  I think he was simply recharging his batteries so that he could get in as much play time as possible while he had so many sets of arms available to bounce him.

The quilt you see Ian laying on is a new one that his Great-Grandma just finished making for him.  Since he has so many baby blankets, she decided to go ahead and make him a twin size quilt that he can use when he makes the transition out of his crib.  That’ll probably be a while, but it’s a pretty quilt to use for him to nap on in the meantime.

Overall, we had a perfect Thanksgiving.  The weather was gorgeous with temps in the 60’s, color still holding onto some of our trees, and slight winds to rustle the leaves around the yard.  Our family gathering consisted of Brinn, myself, Ian, Preston, Daddy, Aunt Connie, Uncle Nat, Grandma, and Sam.  I couldn’t have asked for a nicer family holiday! 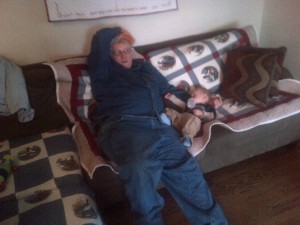 “For in Calormen, story-telling (whether the stories are true or made up) is a thing you're taught, just as English boys and girls are taught essay-writing. The difference is that people want to hear the stories, whereas I never heard of anyone who wanted to read the essays.” ― C.S. Lewis, The Horse and His Boy Join us on our family adventures as I try to tell our stories rather than bore you with more online essays.
View all posts by ashleekiser →
This entry was posted in Family, Friends, Holidays, Ian. Bookmark the permalink.