Saturday found us at Neyland Stadium to watch the vols end their losing streak and avoid a season with no SEC wins.  Ian and I loaded up with Preston and some of the boys from the ranch and headed off to Harriman, where we left Ian to spend the day with his Aunt Joy. The rest of us drove the rest of the way to Knoxville to pick up my cousin Kristine.

Kristine is my little cousin from Illinois.  She would come down every summer to stay with her grandparents (my dad’s sister and brother and law) and spent quite a bit of that time out riding the horses with me.  After a year in New York for college, she made the overnight decision to transfer to Tennessee Tech University and attend my alma mater!  This fall she moved in order to pursue a Master’s at the University of Tennessee.

One rule of thumb for attending a game at Neyland is to arrive early to find parking.  Unless you’re a donor to the university, you’re going to park a ways off and walk.  And parking is ungodly expensive on a game day, but fortunately one lot is free to state and federal employees.

After walking over to the stadium, our first stop of the day was at the “Call in Kick off Show,” to listen for a little while to Andy Kelly.  I remember Andy’s days as quarter back throwing to Carl Pickens (my favorite UT player of all time!). 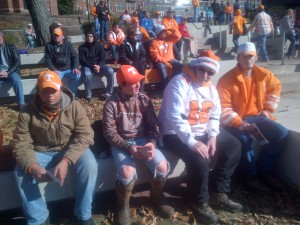 down on us) but we were prepared with Carhart coats and overhauls.  Never underestimate the dressing ability of horse gals.  I finally got Sam to pose for a shot with the field but that was about all the picture-taking the boys would allow.  Bashful fellas.

UT football is a unique beast that requires some firsthand experience to understand.  My dad likens it more to a religion than a sporting event, and he’s honestly right.  Here are some of my favorite observations about UT football.

1. The fans: Vol fans cover the entire state.  It’s not like Florida, where college football fans are split between Miami, UF, and FSU.  While there are a few (note: very few) followers of Memphis or Vandy football (and those primarily being alumni), dwellers of ALL of Tennessee’s regions follow UT football.  UT’s alumni reach into all corners of the country.  Wear some orange in Indiana and another UT fan will find you.  UT’s fans will travel to games anywhere in this country.  I’m not kidding.  When we traveled to Arizona to the Fiesta Bowl, there was way more orange in Sun-devil Stadium than red.

2. The color: Orange is such a festive color, and it’s one that no one (in his or her right mind, anyway) would wear just for the sake of fashion.  Orange means Tennessee.  A giant blob of orange means a hoard of Tennessee fans.  And the color is another fun tradition since General Neyland settled on orange as the school color because it was the color of the centers of the daisies that grew outside the stadium.

3. John Ward: “Give…him…six!  Touchdown Tennessee!”  John Ward was the radio announcer for the vols for half of my life.  He had the most amazing voice, and could make you feel like you were there beside him at the stadium.  I really miss his radio broadcasts, but still think that it was such a fitting retirement for his final season of announcing to end with the National Championship game.

4. Our mascots:  How cool is it that we have 3 mascots?  Tennessee is known as “The Volunteer State” for always having such a high record of men enlisting in the U.S. military during times of need.  Our state motto became the school mascot, and the Tennessee Volunteers are affectionately known as “the vols,” but in addition to being the vols, we’re also represented by Davy Crockett and Smokey, the blue tick hound.  Neat traditions, huh?

5. The Pride of the Southland Marching Band:  Have you ever seen them?  If not, you must watch the circle drill! http://www.youtube.com/watch?v=3zW8Dj4BFU0  So many bands now march out to a formation and hold while they play a song.  Tsk tsk.  That kind of attitude towards marching is killing what marching band should be!  That’s right LSU, I’m looking at you.

6. Rocky Top: Closely related to our band is our unofficial song.  How many other schools have such a catchy fight song that the fans can belt it out along with the band?  To hear an entire stadium of 100,000 fans singing at the top of their lungs all together is a powerful event to get caught up in.  The current controversy is over the “woo” in Rocky Top.  Towards the end of the chorus, after “good ole rocky top” everyone shouts “Woo” together.  http://www.youtube.com/watch?v=EKbOtWeAEnY  Several purists feel that this is ruining the song.  It’s a song about moonshiners and poor soil.  How can you ruin that?  And the woo just makes it belong to the school that much more.

8. Pregame: Before every ball game the band puts on an amazing pregame show.  One of

my favorite parts is watching the drum major run down field.  The dude’s shoulders are nearly on the ground while he’s running!  Another fun part of pregame is that the color guard carries a flag for each S.E.C. team.  The BEST part of the pregame, however, is when the band forms a giant “T” for the players to run through as they come onto the field.  It’s the kind of stuff that sends shivers down your neck.

9. Bowl Games:  Unless Tennessee has a terrible season (such as the last two), they’re almost guaranteed an invitation to a bowl game.  I’m sure this is due to our gigantic fan base and the money we bring to an area, but it’s still nice that with a mediocre season or better we’re usually guaranteed for a nice game to travel to.

10. Record: While Tennessee hasn’t made it back for a National Championship since ’98, and prior to that the last one was in the 50’s, they still have one of the most winningest records in NCAA history.  That’s nothing to scoff at.

11. Decorating!  Everyone decorates themselves AND their cars to go to a game.

“For in Calormen, story-telling (whether the stories are true or made up) is a thing you're taught, just as English boys and girls are taught essay-writing. The difference is that people want to hear the stories, whereas I never heard of anyone who wanted to read the essays.” ― C.S. Lewis, The Horse and His Boy Join us on our family adventures as I try to tell our stories rather than bore you with more online essays.
View all posts by ashleekiser →
This entry was posted in Family. Bookmark the permalink.