5:30 am this morning found Ian wide awake and ready to play.  His cheery mood and steady stream of chatter pulled me out of bed much earlier than I’d intended.  So by 6:00 am I hunkered down in the living room floor with an assortment of toys and books, ready to begin our Sunday.  At 7:00, a hungry little boy polished off half a banana, then after getting dressed for the day and chasing Mogwai around the floor for a while, Ian was ready for a bottle and a nap.  About the time that he drifted off to sleep, Netflix employed that aggravating little policy that pauses your show after you’ve watched a few episodes, and threw up the message prompting you to hit play to resume your show.

I found myself in a conundrum: do I lay Ian down, and risk him waking up as I stand to restart my show, or do I stand with him, and risk waking him up?  Then the skies opened and the deluge ensued.  This is when I looked down at my no longer as little boy and recalled all the advice I’ve received about enjoying the brief time I have him while he’s small.  I studied on Ian’s features, a combination of Brinn, myself, and some that are all Ian, and tried to wrap my brain around the idea that fifteen years from right now, I will be remembering back to a rainy morning, thankful that I left the television off and instead passed the morning quietly holding my constantly growing and changing son.

I thought back to a conversation from just this past Thursday.  Edith, an advisor for Arts and Science and mother to two college-age boys , explained that while hugs are great, nothing can ever compare to holding your little boy.  Another friend, Greg tells this great story about how on his daughter’s first day of kindergarten, he sat her down and asked her to remember this moment, because as quick as they could blink, she would be starting her senior year of high school.  Paige is now a senior in high school and Greg swears that it felt like yesterday that he prepared his little girl for her first day of kindergarten. 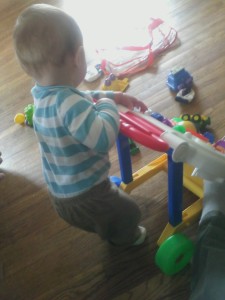 I’ve said before, but am still astounded, at how quickly Ian progresses.  Today marks the eighth month that Ian’s been here, and already tooth number five is cutting through.  Just three weeks ago he lacked the core strength and balance to sit unaided.  He’s gone from scooting and army crawling to honest-to-God up on his knees crawling, sitting up, and now standing!  Since his crawling improved so much, Brinn and I finally put baby gates up yesterday, just in the nick of time.  Now he’s pulling himself up with every surface he can find: chairs, the sofa, the ottoman, the windowsill…and even the dishwasher.  We can’t hardly turn our backs for even half a second before Ian is climbing into something else or crashing.  He wouldn’t fall half so much, except he keeps letting go in his hurry to walk. 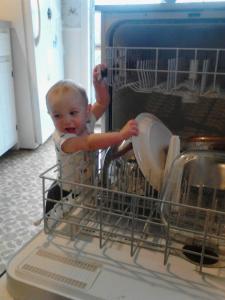 A basket of laundry needs folding, Ian’s breakfast things still clutter the table, muddy paw prints mark the floor, and dirty dishes still sit in the sink.  And these chores will need repeating tomorrow, and the next day, and the next on up until Ian has left me to go to college.  I think they can wait while I type a quick entry here to preserve an account of Ian’s development to jog my memory 20 years from now when I struggle to recall these details as quickly as I do now.

I hope everyone else is enjoying this soggy Sunday as much as Ian and I.  I must now depart to read The Hungry Hungry Caterpillar for the fifteenth time.

“For in Calormen, story-telling (whether the stories are true or made up) is a thing you're taught, just as English boys and girls are taught essay-writing. The difference is that people want to hear the stories, whereas I never heard of anyone who wanted to read the essays.” ― C.S. Lewis, The Horse and His Boy Join us on our family adventures as I try to tell our stories rather than bore you with more online essays.
View all posts by ashleekiser →
This entry was posted in Family, Ian. Bookmark the permalink.