Putting All Our Eggs in More Than One Basket 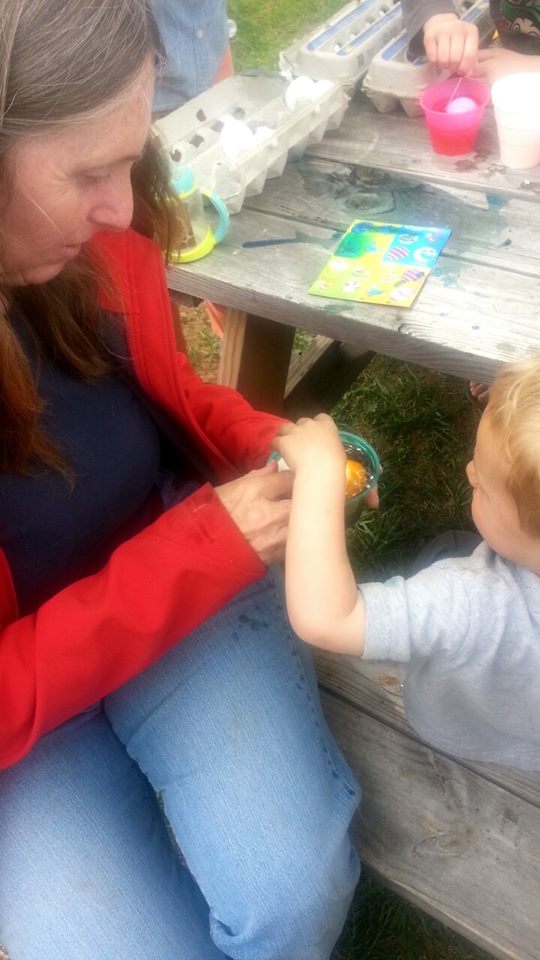 We celebrated Easter week (as opposed to Easter day) this year.  It began Tuesday evening with Tabitha stuffing stickers in plastic eggs as per the preschool’s instructions.  I probably should have finished stuffing the eggs on Wednesday, but alas, I waited until 7:10 am (Ian and I leave the house at 7:15 am) Thursday morning to frantically start the search for Ian’s adorable basket (a generous gift from Aunt Joy last Easter), and tape shut the 12 plastic eggs.  Brinn dropped a pork shoulder in the smoker to slowly cook into delicious barbecue while I dropped Ian at Jacob’s Ladder for school and an egg hunt and took myself to work for eight hours.  At 4:30, I fetched Ian and the two of us headed home to… an empty house.  It’s a little eerie when not even Mogwai and Chaco are home.  Brinn had left for the ranch to pick up the boys.  We had Ben, Sam, and Lil with us from Thursday to Saturday night.

Good Friday dawned with beautiful weather, and a houseful of work.  My feet hit the ground at 7:45 to throw a turkey in the oven, and they didn’t stop again until 7:45 when all of our guests were gone and Ian crashed for the night.  Those hours in between were so busy! 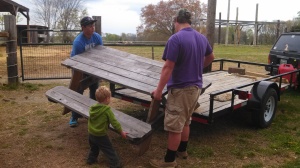 While I was busy in the kitchen, the boys (and this always means Ian now) were busy borrowing some picnic tables from the ranch to accommodate our crowd for the afternoon.With the assistance of all my men, we were able to cobble together a decent cookout until the cavalry arrived.  The first wave of cavalry took the form of my family.  My grandma, mom, Aunt Wanda (technically she’s my great-aunt), cousin Emily (technically she’s my second or third cousin, or something removed?), and Uncle Nat showed up prepared to set up the beverages.  Grandma made her beloved strawberry,

orange, pineapple punch.  I don’t think I know how to participate in a family event without a cup of this punch in hand.  Its absence from a dinner leaves me with the same feeling I experienced in my childhood whenever I missed church on a Sunday morning.  The next wave of reinforcements arrived with Albert and Becky.  They brought wonderful sides.  In fact, while everyone else raved about the potato salad, I was too busy sneaking another spoonful of squash casserole.  Albert, are you reading this?  If so, I really, really need the recipe for that squash casserole!  And Albert also took over the burden of carving the turkey for dinner. Albert and Becky are the parents of the girls’ house at the ranch.  God bless amazing parents who can raise a house full of girls, ranging from 8(ish) through teenagers.  All those hormones in one home…

Along with “our” ranch boys, the new boys’ house parents came out and brought their boys.  This was our first event with all 3 of the ranch homes present!  The new boys’ parents, Dusti and Dan, are some of the sweetest, most caring people I’ve ever met.  Their youngest son is almost the same age as Ian.  Ian was thrilled to have someone his size come over!  Additionally, some of my girls from athletics came out to spend the afternoon with the kids.  Soccer and women’s basketball both had representatives.

After stuffing ourselves silly, the fun part of the day took over.  Egg dying!  When each

holiday comes around, I get caught up in its festivities and swear that it’s my favorite. But when Easter comes around, I remember that it really is one of my absolute favorites.  This all owes to dying Easter eggs.  We set up dye stations at each table, and brought out the eggs.  Between Brinn and Becky, we had somewhere around 130 eggs to dye!  As egg dying completed, we moved on to egg hunting: Ian’s second hunt of the season.  There may have been more volunteers to hide than those who wanted to hunt this year.  Egg hunting was followed closely by pineapple upside down cake and coffee (for those who drink the foul substance), and lazing around while children of varying ages (1 years to 50 years) through, smashed, and ate eggs, until eventually guests drifted away and left us with just my boys.

We all turned in early for the night as Saturday brought a whole other day worth of adventures.  The boys were up and packed well before me, but eventually I staggered out of bed so that we could hit the road and head to the lake.  The morning chill was slow to burn off, and the clouds never quite dissipated, but the lake was calm and the fish were biting.  We drove out to the marina where my mom keeps her

sailboat and spent the entire day on the docks reeling in crappie and catfish.  After the drive home, the boys returned to the branch, and Ian, Brinn, and I crashed into bed exhausted once again. 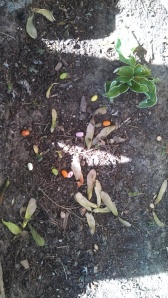 After Saturday’s slight chill, Easter’s warmth was strongly welcomed.  This was our third day to struggle out of bed, but eventually we made it up.  We had a short debate on attending church, but the beautiful weather beckoned us to experience God out in his creation so we opted to spend our Easter outside after a short car trip which gave us the opportunity to listen to our church’s service on the radio.  Before we left the house, Ian and I planted jelly beans in the flower garden.  We’d intended to plant them Saturday evening,

but were just too flat-out tired.  While Brinn strapped Ian in his car seat, and turned the jeep around so Ian was no longer facing the flower beds, I scooped up his beans and planted lollipops in their place.  When we returned home, I asked Ian if he thought his jelly beans grew anything.  He snapped his head around searching for the flower bed, and all but leaped out of his car seat to run to the bed.  When his eyes lit on the sugary growths, he squealed in delight and threw out both arms to “pick” his produce.

Ian splurged and enjoyed one stick of Cracker Barrell’s tutti frutti candy, then got down to the business of looking for his Easter presents.  Virginia prepared an adorable felt basket for him with plenty of goodies, and Brinn and I purchased him his first pets of his own.  Ian knew there were ducklings and chicks in the backyard, and for days had begged everyone he came across to let him into the converted water trough to gain access to the baby birds within.  When we finally took out one duckling and one chick for him to hold, he cradled them against his chest while alternating between “duck!” and “awww…”

So we concluded our Easter with hugging and petting Easter ducks and chickens.  We’re happy about the new avian additions to our smallish flock, and invite you over if you’re ever in need of an inner-species snuggle.

“For in Calormen, story-telling (whether the stories are true or made up) is a thing you're taught, just as English boys and girls are taught essay-writing. The difference is that people want to hear the stories, whereas I never heard of anyone who wanted to read the essays.” ― C.S. Lewis, The Horse and His Boy Join us on our family adventures as I try to tell our stories rather than bore you with more online essays.
View all posts by ashleekiser →
This entry was posted in Family, Friends, Gardening, Holidays, Ian, My Critters and tagged chicks, crappie, ducklings, dye, Easter, eggs, family, fishing, holidays. Bookmark the permalink.