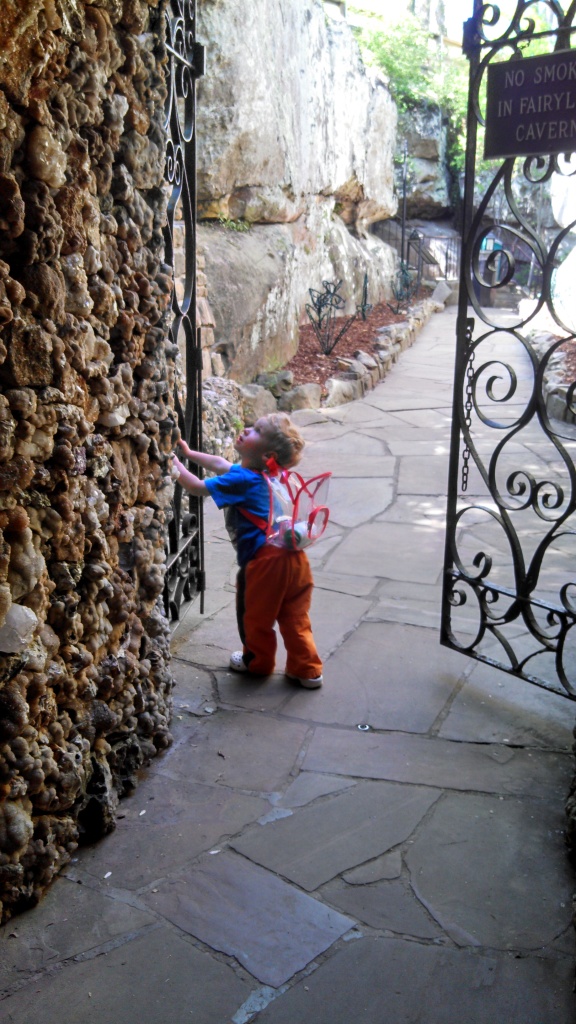 Ian and I visited one of our favorite places again yesterday: Rock 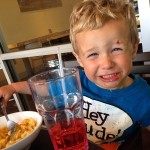 City.  We started the day with an early drive to Chattanooga (with Biscuit in tow; thanks Dottie!), to meet up with Ian’s Nana and Aunt Joy.  Our first stop took place at our now traditional lunch at Noodles & Company, Ian’s favorite restaurant.  Then it was on to Rock City for a day on top of Look Out Mountain.

Ian has grown quite a bit since we visited last fall, and he definitely has improved coordination.  He took considerable more notice of her

surroundings on this trip, so we actually slowed down some this time as he wanted to explore every inch of the mountain.  The weather couldn’t have been better.  A pleasant 70-75 degrees all afternoon, the sun shined well received rays after the long, dismal winter we’ve had.

Mogwai came with us for the last trip, so Chaco finally got to take her turn for yesterday’s adventure.  To say she was

excited would be an understatement.  She loves to visit new places, and thinks everyone came to the park just to see her.  She couldn’t understand why some people would walk right past her without stopping for a quite pat.  When we stopped at the “mine,” she tried to climb into the waterways used for panning gold and gems.

across, and also terrified his Nana by wanting to run and jump on the swinging bridge.

Chaco wouldn’t even consider walking across the swinging bridge.  She and I took the steady, solid, rock bridge.  When we came to the fountain full of coins left in hopes of fulfilled wishes, Ian found some loose stones to throw in the water.  We ended up scooting out from that room in the caverns before Ian had a chance to pull the wrong stone out of the wall…

Aunt Joy can always be counted on to take the best pictures of any outing.

The problem with this is that she’s rarely in the pictures!  I tried to do better about getting some pictures of her on this trip, but photography’s not exactly my strong point. Nor is Ian always the most cooperative of photography subjects.

While we were on this visit, we came upon a family with a little girl 3 months younger than Ian.  Ian always gets excited when he sees anyone near his age.  His first inclination is to run up and hug the little person (as he did on our last Rock City trip), but sometimes little girls can be a little caustic towards little boys.  Ian clearly

wanted to wrap his arms around this little girl, but I didn’t know how her parents would react to a strange boy grabbing their daughter.  I encouraged Ian to keep his hands to himself, so he

sat down, and held his hands in front of him to avoid temptation.  Then she moved in a little closer to him.  Ian looked over to us to get an idea of how should/could react.  Finally, the little girl reached out

and touched him.  When her parents raved about how cute, I told Ian he could hug her. With surprising gentleness (for Ian), he gave her a very soft, but arms-all-the-way-around hug.  She smiled an adorable little girl smile, then went to pet Chaco, so of course Ian showed off with giving Chaco big hugs and telling Aubree that his dog is “Chaco!”  Ladies: he’s not even two and he’s already using his dog to meet women.  What will his teenage years be like???

Later, as we neared the park’s exit, Aubree’s family came up on us again.  This time she reached out and grabbed Ian’s hand.  The two walked out of the gates hand in hand.

trip.  For example, you get really thirsty hiking.  Well, maybe we already knew that, but did you know that you can carry in your own drinks rather than having to purchase their expensive ones (or drink from germy water fountains)?  Not only can you take in drinks, but you can also take in snacks.  We loaded our bags down this time, and brought in half a water

melon!  Halfway through our walk, we stopped for a watermelon snack.  We also learned that the winery is apparently never open!  But they do have the coolest chandeliers hanging above the stand where they sell wine.  I think I need one on the deck once we cover and screen it in.

You would think Rock City would be enough adventure for one day, but the day was just too beautiful to not spend as much time as possible outside.  When Ian became s

o tired that he had trouble standing up, or walking like a sober person, we packed up and headed for the jeep.  He took a nice nap coming down the mountain, and proved to be a little groggy when we made it to Coolidge Park, but he was happy enough to wake up for Clumpie’s blackberry white chocolate chunk ice cream, then a quick splash in the riverfront’s splash pad.

Surprisingly Ian didn’t sleep much at all on the drive home.  The little booger stayed awake until the last 20 minutes babbling away about his day.  Chaco, on the other hand, passed out as soon as she climbed on a blanket in the back, and didn’t move until we pulled in the driveway.

Half-way home, I pulled out our dinner –the remainder of the snacks we’d

packed for the park.  I handed the bag of sliced strawberries back to Ian, thinking he’d grab a handful out of the bag, and I’d finish the rest.  The scamp took the whole bag from me, and proceeded to eat every berry, then lick the remaining juice out of the bag!

Ian acted fine when we got home, even splashed around in the tub with great gusto.  He sat up and helped Brinn polish off a bowl of popcorn, and drank another cup of almond milk.  When this morning came, however, he had no intentions of getting out of bed.  If you visit Rock City this spring, watch out of for the Chattanooga Hangover!

“For in Calormen, story-telling (whether the stories are true or made up) is a thing you're taught, just as English boys and girls are taught essay-writing. The difference is that people want to hear the stories, whereas I never heard of anyone who wanted to read the essays.” ― C.S. Lewis, The Horse and His Boy Join us on our family adventures as I try to tell our stories rather than bore you with more online essays.
View all posts by ashleekiser →
This entry was posted in Family, Friends, Ian, My Critters and tagged Chatanooga, little boys, See Rock City, splashpad, sunshine. Bookmark the permalink.