Holding Out for Summer

As July fades into August, cool air from Canada descends into Tennessee, bringing some serious hints toward autumn.  At this same time, Putnam County residents send their children back to school to begin the fall semester (yes, we start early here), and my pumpkins have even started turning orange out in the garden!  All of these events culminate into an undeniable feelings of fall lurking right around the corner.  I love fall, and eagerly anticipate this time of year, but this year I have some serious problems with these feelings.  To begin with, look at the date of this post: it’s still July!  Simply put, I am not quite finished with summer, and not ready to put it back in the box to pull out again in May.  After such a long winter that drug on well into March this year, I plan to revel in the hot sunshine as late into September as possible for 2014.

Here are just a few reasons for summer to linger later this year:

Trips to Centennial Park —Unfortunately Cookeville does not contain a Trader Joe’s.  So when I have a hankering for Cookie Butter or organic tortilla chips, we have to make the trek to Nashville.  Ian and I leave early, hit TJ’s while it’s cool enough for Mogwai and Chaco to hang out in the jeep, pack all of our cold items in coolers, and then head off to Centennial Park 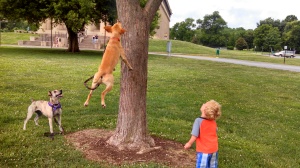 for a picnic with our TJ’s finds, a walk around the park, some urban squirrel chasing, and then a climb up the Parthenon.  This routine has worked well for us this summer, and hopefully will prepare Ian to appreciate Percy Jackson when he’s ready for chapter books.

Rafting and Camping —Prior to Ian’s admission to the family, Brinn and I spent majority of our summer weekends (those not at horse shows, anyway) camping and rafting at the Ocoee.  Paddling is typically a winter/early spring sport simply because that’s when enough rain falls to raise the creek level enough for paddling.  The Ocoee, on the other hand, runs during the summer.  It’s controlled by TVA’s dam release schedule, so we score with regular water during the months that you actually want to jump in a river. From March until October, we’re guaranteed at least two days a week of 1200 cfs water flow.  Between Memorial Day and Labor Day TVA opens the flood gates more often and provides five days of water flow each week.

Once Ian debuted, camping and rafting had to take a brief vacation from the Kisers, but

now Ian’s ready and has fully embraced camping.  It’s the only time in his (brief) life that he’s been allowed to stay outside as long as he’s wanted.  Due to some wonderfully gracious friends and family who have volunteered to entertain Ian during the day, I’ve even been able to cruise down the river a few times in our self bailing Aire.  Our big yellow boat needs a name.  Any suggestions?

Gardening —There’s just not much better than stepping outside and pulling dinner off of the vine ten minutes before cooking it.  The last several weeks we’ve been enjoying squash, zucchini, tomatoes, corn, cucumbers, lettuce, spinach, onions, green beans, cilantro, basil, oregano, rosemary, thyme, mint, and peppers.  A few times we’ve indulged in fried squash and fried green tomatoes, but largely we’ve been enjoying these items well seasoned and placed on the grill. 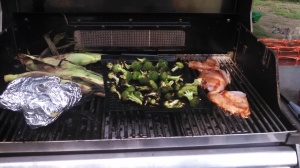 One of my favorite summertime treats is fresh pico made straight from the garden.  One can never use too much cilantro, so we had to put out two cilantro plants to carry us through this summer.  I think we’ll just make it to autumn before the stems are bare.

Outdoor Dining and Cool Treats —The gift of gab has finally graced Ian, providing him with the distinct ability to declare what his innermost desire is: ice cream!

the relatively cool summer to eat outside on the deck.  One evening, Brinn’s birthday actually, we even had a crawfish boil outside.  Despite the mess, everyone had a good time and stuffed themselves on crawdads, shrimp, mussels, potatoes, mushrooms, and corn.  We may have to repeat this meal before the leaves begin turning.

Outside Play! —With the extra daylight during the summer, we try to get outside as much as possible.  Each evening, after Ian and I return from work and preschool, we all pack up and head outside.  Sometimes to go for a hike at one of the local start parks, but more often to get in the water at a local spot called Waterloo.  This unique location along Spring Creek features a small set of waterfalls that are perfect for swimming under and climbing on, with a much larger set of falls on down-river.  The wide deep pools below each falls are perfecting for getting our boats out to paddle around.

On our tired evenings, we enjoy sitting out on the porch swing

and watching Ian tear around the yard on his John Deere.  He has such important tractor oriented tasks to complete, you know.

So you can see just a few reasons why we’re not quite finished with enjoying summer yet.  Am I looking forward to fall? Absolutely!  I’m just not looking forward to cold rather than cool mornings, shorter days, and brown stalks in place of my thriving garden.  So instead, we shall carpe diem (an educated version of YOLO); the seizing for this day involves all of us going to the woods for a long walk!

“For in Calormen, story-telling (whether the stories are true or made up) is a thing you're taught, just as English boys and girls are taught essay-writing. The difference is that people want to hear the stories, whereas I never heard of anyone who wanted to read the essays.” ― C.S. Lewis, The Horse and His Boy Join us on our family adventures as I try to tell our stories rather than bore you with more online essays.
View all posts by ashleekiser →
This entry was posted in Family, Friends, Gardening, Ian and tagged camping, Ian, rafting, summertime. Bookmark the permalink.

2 Responses to Holding Out for Summer