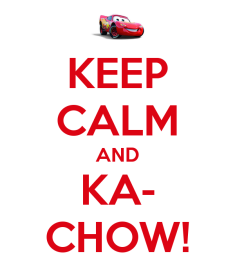 Ian still doesn’t care to spend much, if any, time watching television.  We’ve attempted to entice him with various cartoons to gain 15 minutes to get caught up chores such as washing a sink full of dishes or sweeping the floor without little helping feet walking through the dust piles. Despite an aversion to most children’s programming, Ian has discovered Lightening McQueen.  Ian will occasionally watch Cars for a whole 5 minutes at a time.  Ian has taken his new favorite phrase from Lightening McQueen: “Ka-chow!”

Last week we purchased Ian’s first kayak.  He is still

far too young and small to be ready to paddle his own boat, but a great deal came available and we couldn’t not take advantage of it.  A friend who lives nearby, who happens to also be a paddling buddy, has a little boy of his own.  His son has outgrown his Jackson Fun 1.  Tom decided it was time to move his tike up to a larger boat, and mentioned that he was going to be selling the Fun 1.  Coincidentally, this is the same boat that Brinn and I paddle, just much smaller of course.  So despite Ian’s lack of age and size, he is now the proud owner of his very own kayak. 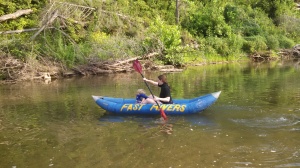 Ian’s been going to the creek with us all summer and floating around in a funyak to get familiar with being out on water.  So far he’s been a huge fan, and gets excited when we paddle through the small “rapid,” which is essentially a narrow slot through the rocks where the current picks up a little more quickly.  After picking up his new boat from Tom, we asked Ian what he wanted to name it.  Of course he had no response, but since it’s a red boat, I asked if he wanted to call it “Lightening McQueen.”  With a little prodding from Tabitha, Ian declared that he wanted to christian his boat: “Ka-chow!”

Rather than letting Ian’s new boat sit in our kayak shed for the next year, we decided to 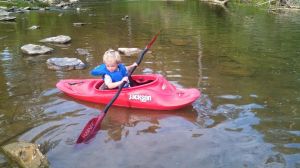 take it up to Spring Creek to see what Ian thought.  Rather than climb into his boat and wait for one of his parents to push it off the bank into the water, Ian immediately drug it by himself onto the rocks at the edge of the water.  He proudly declared, “big, big boat!” and stepped on in for his maiden voyage.  I assumed that I would paddle around in the funyak while Brinn would push Ian around in Ka-chow, but we were mistaken.  Ian seized my paddle (my beloved bent shaft Werner Twist) and gave it his very best effort to paddle himself around the creek.  The paddle is entirely too long and heavy for Ian to make much progress, but he wants to be mobile in the worst way.  I guess we’re in the market for a youth paddle much sooner than we expected to be. 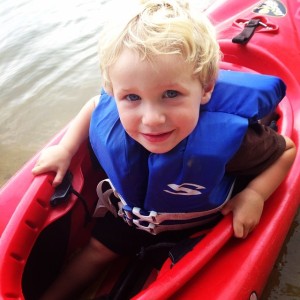 On Sunday Joy and I discovered a method Ian enjoys sans paddle.  We stood about 10 feet apart from each other in the lake and pushed Ian’s boat back and forth to one another.  His big smiles indicate that this activity will be repeat worthy.

You can see that Ian’s legs come nowhere near his thigh braces, and we haven’t even attempted to blow up the happy feet as his feet come nowhere near close enough to push against.  And of course he doesn’t sit up high enough yet for a spray skirt to fit.  Our first prerequisite for Ian to begin river running will be the ability to pull a spray skirt off on his own upside down even when panicking.  He’s a strong dude, but spray skirt rubber is pretty strong too, so this little boy won’t be throwing down in Hell Hole anytime soon, but I think we can safely assume that he has a future heading towards weekend paddling trips.  The bigger question: Will he be a river runner like his momma, a creek boater like his dada, or a rodeo boater?  Hopefully he’ll give us a few years to prepare my heart before he starts hucking falls or pulling McNasties in a big hole. 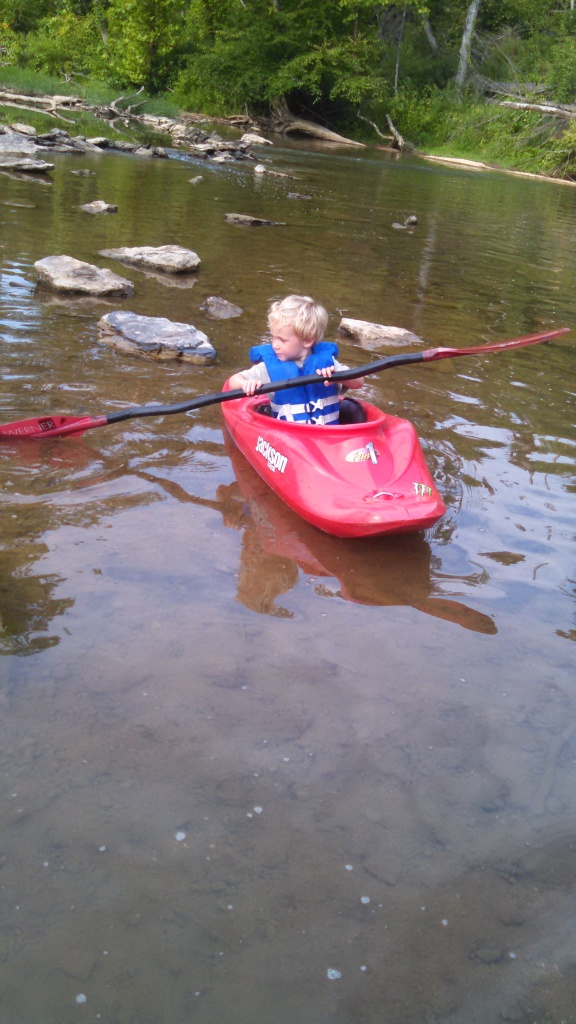 “For in Calormen, story-telling (whether the stories are true or made up) is a thing you're taught, just as English boys and girls are taught essay-writing. The difference is that people want to hear the stories, whereas I never heard of anyone who wanted to read the essays.” ― C.S. Lewis, The Horse and His Boy Join us on our family adventures as I try to tell our stories rather than bore you with more online essays.
View all posts by ashleekiser →
This entry was posted in Ian, paddling and tagged boating, Cars, Fun1, Ian, Jackson Kayak, Ka-chow, Lightning McQueen, paddling, Werner. Bookmark the permalink.