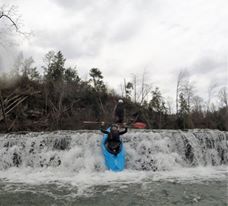 So it’s been more than ten years since I’ve been down lower Spring Creek in a kayak…at least through the “big” section. Now keep in mind that “big” to me, is a nice relaxing float to Brinn. The last time I ran this section of Spring in a kayak, I was a first year graduate student back in  the fall of 2005! I still had a C-to-C roll and a plastic paddle. Some runs, like Jett to Lilly on Clear Creek, give you a generous warm up stretch of friendly class II rapids to ease you into the trip, but not Spring Creek. You can choose to walk around the 30 foot waterfall that starts the trip (or superman over it out of a raft, another story for another time), but then your first real rapid quickly approaches in the form of a decent sized ledge.From there, you have just enough time to catch your breath and then realize that you’ve reached Meat Grinder.

Brinn thinks I read too much into the names of rapids. Come one, with names like Broken Nose, the Grunch, Hell Hole, and Godzilla, how do you not crap your pants? Back in ’05, Brinn decided I could not refer to Meat Grinder by its given name. He declared that I had to call it Pink Fluffy Bunny. Guess what: I still walked around it. This rapid just scares the bejesus out of me! Fast forward in time– Christmas Eve 2014: Brinn says, “hey, your mom is here with Ian, want to go rafting after work?” Ashlee: “Sure, come on Ben, you should come too. It’s easier than the Ocoee.” Christmas Day 2014: Oww. Remember your D.A.R.E. lessons kids; just say no!

But then last week it started raining…and the rain rain rain came down down down and the flood flood flood came up up up… Friday found the creek at a friendly level just below one foot. The ranch (MSR) volunteered to keep Ian for the afternoon so we could catch an evening paddle after work. So Brinn and I loaded boats and headed off to set up shuttle.

Peer pressure is a tough thing. Thankfully not much of it happens in a marriage, at least not so long as its just the two of us. But through some canoeists in to the mix, and it gets a lot easier to peer pressure your spouse to keep up. Pink Fluffy Bunny came upon us too quickly. Despite Brinn’s decade old demand (there has to be an expiration date on such demands, right?), I could only think of this rapid as Meat Grinder. We pulled over above to scout, and it looked completely different than I last remembered it when Spring Creek was at three foot. I waited and waited for Brinn to offer to help me carry around…and durned if he didn’t! We watched the canoes run the drops and make them look deceptively easy, and Brinn announced it was time to get back in my boat.

You know that feeling you get in the middle of something you thought was going to be really hard? When all of a sudden you realized it wasn’t nearly as hard as you thought it would be? Nope. Didn’t feel that AT ALL through Meat Grinder! Over both drops I just kept thinking “this is so BIG! What am I doing?!?” Then when you complete a challenging task, you usually have that pumped feeling of leftover adrenaline for achieving something tough…nope, didn’t have that either. I did have the “holy crap, I just ran THAT” feeling. But I DID run Meat Grinder cleanly. I didn’t miss my line, flip, stern squirt, or screw up at all through it. I’d like to brag about how I cleaned up and owned this creek…but for one, river karma may come find me to discuss that claim and two, we need to talk more later about the incident that occurred a few rapids down…

After a few days to reflect, I’ve finally realized that I did have fun running Meat Grinder so that I could finally defeat that personal road block. I learned a lot about this trip. Mainly, you can’t paddle a few times over one year and jump back to the level you were doing when you were twenty-five. Muscle memory will get you so far, but your roll doesn’t come right back when you smash into rocks. And you have to keep paddling! Stay tuned for part II, aka “Ashlee swims Spring Creek…again.”

“For in Calormen, story-telling (whether the stories are true or made up) is a thing you're taught, just as English boys and girls are taught essay-writing. The difference is that people want to hear the stories, whereas I never heard of anyone who wanted to read the essays.” ― C.S. Lewis, The Horse and His Boy Join us on our family adventures as I try to tell our stories rather than bore you with more online essays.
View all posts by ashleekiser →
This entry was posted in paddling and tagged Dagger Mamba, kayaking, Meat Grinder, Spring Creek. Bookmark the permalink.