How to train your bite sized paddler

How can winter drag on for months and months, but summer pass in the blink of an eye? We are absolutely summer time people, and spend every possible moment of summer in the water. I’d intended to chronicle all of our summer time exploits, but it seems like one adventure has barely ended before we’re off to the next grand adventure! 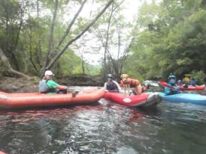 four going into this summer, which has opened so many new possibilities for his adventuring options. Having a fully potty trained little boy with stronger listening skills and deft
muscle control has upped his abilities on the river. He’s managed to fit in four Hiwassee runs, so far, and no longer finds it exciting. The river was new and exciting again on his first trip, but the next two trips couldn’t hold his attention long enough to keep him awake. Two trips in a row found Ian

sleeping from Big Bend down to Three Chutes, where an angry boy woke up after the wave slapped him in the face. He would drift off again until the top wave of Devil’s Shoals. More angry wake-up. A spectacular thunderstorm caught us on Ian’s last Hiwassee run, so we had some driving rain to keep him awake for once.

We’re slowly stepping up the difficulty for Ian on the water this year. He’s probably ready for a harder challenge than we’ve presented him with so far, but I’m hesitant to push him too far. When schooling a green horse over fences, you always want to present them with enough of a challenge that they’re progressing and improving, but not so much that you overface them and damage their confidence. That’s when they learn to refuse and duck-out through a line of jumps. I don’t want Ian to learn to refuse. He has such an infectious enthusiasm for all things related to water right now, so I’m happy to let him come to us to ask for more, rather than us begging him to step it up.

One of the steps we’ve let him make this summer is to get on the Nantahala. Brinn spent a great deal of his childhood on this river, and felt it would be a natural step up for Ian. We’ve only hit the Nanty once, so far, and made Ian stay in a raft for his first trip down. It was love at first descent. Ian is happy to tell anyone who asks that the Nanty is his favorite river so far. The only problem we ran into on that trip came at the tail end. Brinn and Wes decided to run Nantahala Falls (aka Lesser Wesser) in our duckie. When they carried the duckie back up river to get in above the falls, Ian thought they were taking the duckie up for him. He was distraught that his Daddy was going down without him. I guess our next discussion will be to determine if Ian is ready to take on the chill of the Nanty while sitting down low in his funyak…

“For in Calormen, story-telling (whether the stories are true or made up) is a thing you're taught, just as English boys and girls are taught essay-writing. The difference is that people want to hear the stories, whereas I never heard of anyone who wanted to read the essays.” ― C.S. Lewis, The Horse and His Boy Join us on our family adventures as I try to tell our stories rather than bore you with more online essays.
View all posts by ashleekiser →
This entry was posted in Ian, paddling and tagged Hiwassee River, Ian, Nantahala River, summertime, white water kayaking, white water rafting. Bookmark the permalink.