The Walk of Shame

Last weekend Brinn and I attended a swift water rescue course through the Tennessee Scenic Rivers Association at the Ocoee. For once, all of our plans went off with no delays, and we actually found ourselves in Ocoeeland early, so we were able to sneak in a quick river trip before checking in for our course. We had packed Ian’s funyak on the off chance that we would have time at some point to actually get on the water. Now I haven’t actually been back on the Ocoee in a kayak since I’ve had Ian. I’d hoped maybe this summer was the year it would happen, but it’s hard for me to justify taking time away from Ian to paddle when he wants to be on the water with us. So we’ve spent a great deal of the summer on smaller rivers, and I’ve managed to spend all of one day on the Ocoee in a raft.

So here we were at the river with Ian happily involved with his Nana, and no excuses before me. It was time to get back on the Ocoee…except I left my confidence somewhere back in labor and delivery, and my awesome sweep roll with it. Brinn figured we could split the difference between kayaking and rafting and he would take me down in Ian’s two-man ducky. My whole experience with inflatable kayaks has been on class II’s with a small child and dog on board. I spent the majority of those trips on my knees trying to correct our trajectory as Ian and Mogwai’s constant movement turned the boat continuously. This was going to involve a completely different skill set.

For starters, how do I stay in this boat? Sitting in the floor and leaning against a back rest is cool when floating down the Hiwassee. Now what do I do to stay in through a real rapid!?! (hindsight: order thigh braces) Solution? Sit really far forward and wedge my feet into the sides of the tubes as tight as I can.

After unloading and parking, we were ready to carry down the ramp and put in…except I’m a weenie. I decided I just wasn’t ready to put in at Grumpy’s. And thus began the walk of shame down the side of the ramp to the rails. The rails are a set of metal railings used to slide rafts down to the water back in the day before the main put in ramp existed, conveniently located after Grumpy’s. I felt a lot like a loser walking the path to the rails, watching all the happy and accomplished boaters float past us with nary an issue as they dropped over the main ledge of Grumpy’s and punched through the hole. I felt even more like a loser as Brinn handed me both of our paddles and hitched the ducky over his head to carry solo while I stumbled along behind fretting over my perceived issues. I really began to associate my walk around as a shameful action. One which I should avoid mentioning when other boaters ask about my Ocoee day.

But you know what? We got in the water below Grumpy’s which gave us the friendly

staging eddy wave to get comfortable paddling together, and a chance to get adjusted and ready for the rapids ahead. We went on to have an incredible time on the water, and we have no guarantee that we would have had as much fun had we run Grumpy’s instead of walking it. Maybe we would have punched right through like everyone else, and I could’ve had a new brag to file away in my river resume. Or maybe our floor would have buckled when we hit the hole and we would have both swam and picked up some impressive bruises that would seriously have put a damper on the entire weekend. Was it the right choice to walk around? Yes! Because it put me into a better frame of mind and we ended up having a blast. Maybe other boaters will look down on me because I walked around rather than running through Grumpy’s, and that’s okay. If they’re running Grumpy’s, they can absolutely judge me for choosing not to. That judgement says more about them than about me, and I’m slowly learning to be okay with that. Brinn always likes to remind folks, “the river is not a fashion show. We’re not here to impress anyone.” I’m definitely not impressing anyone when I go boating, but I’m also learning that it’s okay that I’m not impressing anyone.

I offered to make my shameful hike alone, so that Brinn could run Grumpy’s on his own and meet me below. His answer is one I’ve heard many times (reason #897 I’m keeping him): “I came to go boating with you. I’ll run what you can run.” This reply has been running laps around my head for the last week as I’ve tried to resign myself to my limited paddling opportunities these days. On one hand, I feel like a complete slacker because I’ve not built back up to the runs I used to be able to do in my pre-mommy paddling days. But on the other hand, I feel guilty when

I’m on the water  without Ian. Brinn and I had an amazing afternoon on the Ocoee together, just like it used to be before Ian. But we do have an Ian in our lives now. And while it was fun to run some bigger rapids for a nice change of pace, we both realized how much we missed our little guy. Ian would have defended me when I told Brinn I really wasn’t paddling everytime he called me out for pulling strokes when really my blade snagged current because I didn’t hold it up high enough. He also would have laughed at me for yanking it up too high at Double Trouble when I was trying to make a point. After my feet flew up at Double Trouble, Brinn and I both chuckled while we discus

sed how much Ian would have loved to watch that happen. When Brinn fell out of the boat at Left Right Left, we snickered about the reaction Ian would have had to one of us not paying attention despite harping on it to him.

Brinn walked around a rapid that he enjoys, because paddling has become a family sport for him. I’m deciding that I’m okay skipping rivers that are fun for me so that I can accompany Ian on trips appropriate for him. There will be plenty of time for the bigger runs later when he’s older, and he and I can build up to them together. I’m not trying to say that parents should give up their own pastimes to always accommodate children.I whole heartedly believe the parents should continue to have their own interests, and even spouses should continue to have something to share outside the family unit. But in our case, we made the decision for paddling to be a family adventure. We will definitely make some exceptions to this, but largely, if the weather permits, and Ian asks to go out, I’d prefer to go on one of his runs. Once he begins paddling solo, he’ll advance so quickly that I’ll soon be left on the banks taking pictures of his gnarly class V runs. I’d better enjoy the time we can paddle together while it lasts. 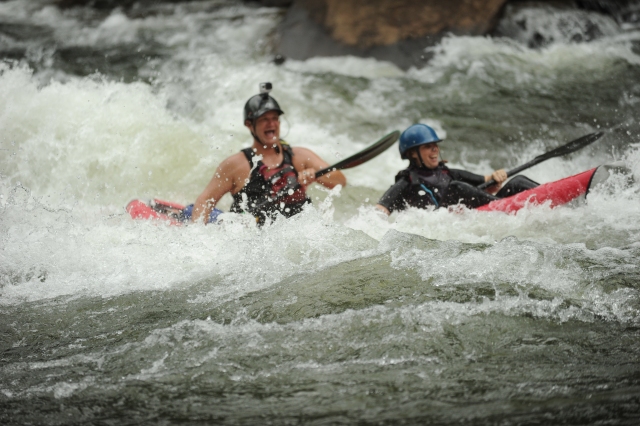 SYOTR, but it will probably have to be a class II river. And it’s okay if you want to feel ashamed for me. I’ll have the best seat in the house watching Ian cackle and grin everytime we punch through a small hole.

“For in Calormen, story-telling (whether the stories are true or made up) is a thing you're taught, just as English boys and girls are taught essay-writing. The difference is that people want to hear the stories, whereas I never heard of anyone who wanted to read the essays.” ― C.S. Lewis, The Horse and His Boy Join us on our family adventures as I try to tell our stories rather than bore you with more online essays.
View all posts by ashleekiser →
This entry was posted in Family, Ian, paddling and tagged Aire Tributary, busy life, funyak, Ocoee River, parenting, white water kayaking. Bookmark the permalink.