Have you heard about the new restaurant in Wartburg? You know, the fondue place. The Ziegler family started running it last week. Excellent food and superb service. Just watch out for the trebuchet launching dried beans after the meal…

Organizing my mom’s birthday proved a bit challenging this year. She did some quick traveling with her siblings the week of that we had to plan around. On top of that, TTU had its first week of the fall semester which brings all of its new semester work craziness for me. Finally, Brinn acquired a massive ear infection from our weekend of rescue training on the Ocoee. While we’d hoped to take my mom to the Melting Pot in Knoxville, it looked like we were going to have to focus on a venue that didn’t require reservations. After some initial planning and attempts to coordinate our brood, Brent offered to recreate my mom’s favorites from the Melting Pot’s menu, leading to his conception for “the Smelting Pot.”

Most families are a bit of a toss-up; you get some crazies, some drama queens/kings, a slacker or two, the fun ones, and those that no one can really stand. I’m sure our family probably appears this way to outsiders, but ya know, for the most part we’re pretty lucky to mainly have a big group of the fun ones. My mom’s cousins, Karen and Brent are right at the top of the fun ones. Brent went above and beyond to prepare an amazing selection of food with choices of beef tenderloin, chicken, sa

usage,
and shrimp to be cooked in a choice of flavored oil or broth. Then the veggie selection. Holy moly the amount of veggies! The Smelting Pot offers a much larger selection of veggies to its diners! I can’t remember what kind of cheese Brent made to start the evening off, but I’m pretty sure it involved chipotles. I could really go for a big bowl of that cheese and some tortilla chips right now…

Getting my mom on time to the Smelting Pot while keeping it a surprise for her definitely took some deception, but fortunately the entire family was up to the task. Hopefully she didn’t really think we were going to downplay her birthday as much as we implied leading up to this event. 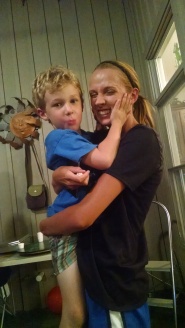 Ian loved going to Karen and Brent’s instead of the Melting Pot, largely due to their daughter, Emily. Unfortunately Ian does not have any cousins close to his age (except for his surrogate cousin, Charlie), so he’s decided Emily is his go-to cousin. Except Emily is 18 years old and in college…and probably doesn’t want to spend her time entertaining a 4-year-old. But that doesn’t slow Ian’s requests down as he begs Emily to play, play, play! She and her sweet boyfriend Jonah spent a large portion of their evening jumping on the trampoline with Ian. As dark rolled around, they headed out to join friends at a bonfire, and Ian was left to his own devices. Until Brent found a working model of a catapult. Karen armed Ian with a bowl of pinto beans and Brent showed Ian how to load and fire. I’m not sure if any other toy or mechanism on the planet could top the fun Ian experienced with aiming for and pelting me with beans and marshmallows all evening.

If you happen to be around Morgan County, you should look up the Smelting Pot. I’m
sure its doors are only open limited days throughout the year, but if you happen to be on Lone Mountain and catch a whiff of cheesy chipotles, be sure to swing by. 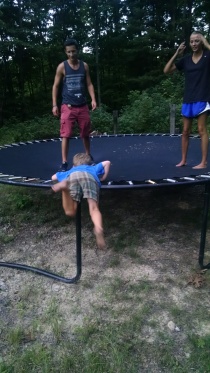 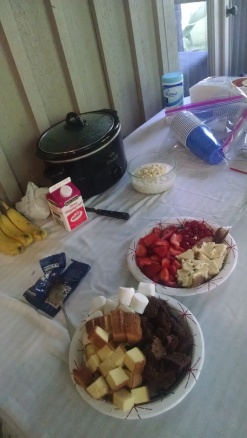 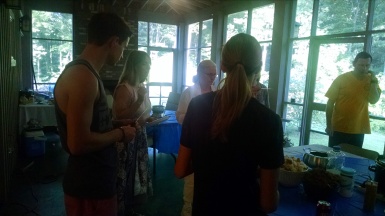 “For in Calormen, story-telling (whether the stories are true or made up) is a thing you're taught, just as English boys and girls are taught essay-writing. The difference is that people want to hear the stories, whereas I never heard of anyone who wanted to read the essays.” ― C.S. Lewis, The Horse and His Boy Join us on our family adventures as I try to tell our stories rather than bore you with more online essays.
View all posts by ashleekiser →
This entry was posted in birthdays, Family, Ian and tagged birthday party, birthdays, cousins, family, fondue, Ian, the Melting Pot, the Smelting Pot. Bookmark the permalink.