I experienced an exciting culinary breakthrough this week…I made cheese! Like, from scratch and everything. And you know what? It wasn’t hard. Except I thought it was a lot harder than it turned out to be. In fact, I really thought I botched it up and was ready to cry about the waste of an entire gallon of milk, but then something weird, and amazing and not right, but wonderful happened.

Let’s back up. Several years ago, six years in fact, Brinn had major surgery to remove a kidney. He’s fine, and his health is great, but multiple doctors encouraged us to really take care with Brinn’s remaining kidney as he no longer has a spare. This kicked off our quest to improve our lifestyles through diet, and we began to look more into what our food is actually made of. This encouraged us to continue our gardening and canning practices, and gave Brinn permission to hunt more. By default, we found ourselves becoming locavores –a term I’d never heard until a coworker commented on this food movement. It seems we accidentally became locavores, but now we find ourselves making conscious efforts to choose local when possible. Enter dairy.

A year ago kayaking brought me together with the sister of a dear from grad school. Brinn and I began paddling with the sister and her husband, who operate a micro-dairy together a couple of counties south of us. After touring their immaculately run dairy, and meeting their very happy, extremely well cared for cows, we decided to purchase a herd share and become customers of Orchard House Creamery. We’ve been customers for months now, but never seem to have very much extra milk that I can experiment with. I’ve been able to skim the cream a few times to make butter, but that had been the extent of my career as a dairy maid. But finally, at the beginning of this week, through a windfall to me (but a loss to the Creamery), JoAnna had several extra gallons of milk on hand that she offered up for my culinary needs.

Of course I immediately consulted the Pioneer Woman, because she’s my culinary go-to for advice when I need a process explained in a simple to follow format. I carefully assembled all of my required items: large metal, non reactive pot –check, slotted spoon to skim curds–check, bowl for microwaving the curds –check, knife for slice the curds –check, gallon of milk –quadruple check, citric acid –check, and vegetable rennet –check. I double and triple checked the steps in my recipe. I made sure to pre-measure all ingredient, and felt I was ready to jump in. I spread my 1.5 teaspoon of citric acid in the pot, added 1/4 a cup of water, then mixed in a gallon of milk. I slowly brought it to 90 degrees by keeping a careful eye on the thermometer set in the mixture. I removed the pot from stove at exactly 90 degrees, and mixed in the 1/4 teaspoon of rennet that had been dissolved in 1 cup of water. I even made sure to time my stirring to exactly 30 seconds, then stop the movement of the rapidly forming curds. I capped the pot with the lid and made sure to not disturb my curds for five minutes. As soon as the timer went off, I jerked the lid off in eager anticipation to find my softly forming curds that should have been the texture of soft custard. But that didn’t happen.

I expected to find a big pot of pudding. That’s what all the pictures looked like from the four different cheese making sources I consulted (I did make sure Pioneer Woman knew what she was doing). Instead of a consistent mixture of soft dairy product, I had a big ole pot of thin liquid with a floating blob. I stabbed into the blob and tried to cut it into squares as Pioneer Woman instructed, but my blob was too tough and wouldn’t separate. Brinn offered to look up a how to video while I frantically googled for trouble shooting on blobby cheese making. Guess what…I couldn’t find an explanation for how to fix blobby cheese issues. Neither could Brinn. How was I going to explain to JoAnna that I just ruined an entire gallon of her high quality milk? In desperation I grabbed the blob out of the pot, thinking o=if nothing else I want to touch the slimy snot textured mixture that Pioneer Woman laughed about playing with during her cheese making experience. I resignedly decided that fondling snot was going to be the highlight of this ruined batch…except my blob didn’t feel like snot…actually, the more I kneaded and stretched it, the more it felt like…cheese!

I checked my recipe to be sure, and confirmed that I had followed every ingredient correctly up to this point. The next step was supposed to be slice the curd in squares…and cook it back on the stove until the whey begins to cook out of the curds and leave blobs of cheese! Somehow I cut off about six steps from my recipe, yet still made cheese! I skipped ahead in my recipe list and threw my non-snot blob into the microwave for sixty seconds. Glorious, stretchy, gooey, mozzarella came out. I tossed it into a colander to drain for a few minutes then nuked it again for 30 seconds. And I had cheese! So of course I returned to Pioneer Woman’s advice and drizzled it with olive oil, then added salt, cracked black pepper, and red pepper flakes. Absolutely divine. Amazing, incredible, delectable, and… even miraculous after the weird start. Ian and I munched down almost half of this first batch of mozzarella before I started a second recipe. Just to be sure, I followed Pioneer Woman’s steps again. And for a second time I removed the pot lid to find cheese floating in my whey! I don’t know how I managed to repeat this accident, but I went on to make a total of FOUR batches of mozzarella, and all four times, I went straight from adding the rennet to finding cheese in my pot. I still can’t explain my accident, but the more I read about dairy, the more my suspicions are taking shape.

Most of the amateur dairy sites recommend that you very carefully select your source for milk. They absolutely forbid the use of homogenized milk, and strongly discourage pasteurized milk as already pasteurized milk will not respond well to the heat in most recipes. I also learned that most dairies tend to literally skim the cream off the top (now that phrase makes so much more sense when I hear people refer to crooked business practices this way), as they can sell the cream for a higher price, and actually give their whole milk customers a product closer to 2%. Orchard House pretty much does the opposite of these crooked dairies. Not only do Ben and JoAnna leave their milk completely intact, but I also suspect that their milk has a higher cream content than other milks. For one, they have jersey cows, which are supposed to produce more cream than other breeds. For two, Orchard House’s cows have an excellent diet. They largely eat grass, and while JoAnna claims to supplement the diet for their cows, I really can’t see her cows choosing to eat much of it over the beautiful grass they’re turned out on. And three, these are happy cows. I still don’t know a whole lot about the dairy business, but I remember from reading The Little House series that stressed cows produce bitter, thinner milk. And if Laura Ingalls says so…

So my conclusions are this: Orchard House Creamery produces an excepti

onal product for their herd share customers. The milk is so full of cream that it practically turns itself into cheese with the barest amount of work. If you’ve ever considered giving local milk a try, I strongly encourage you to give Orchard House a try. Come by the house and try some of our milk, cheese, or butter if you’re on the fence. Ben and JoAnna currently deliver to Cookeville and Chattanooga, but I bet they could venture west if enough customers surfaced. Just in case you’re still hedging, check out our manicotti stuffed with homemade ricotta and mozzarella from last night. Folks, it doesn’t get much better than this. 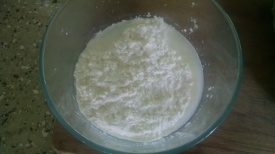 See the grains of butter forming! 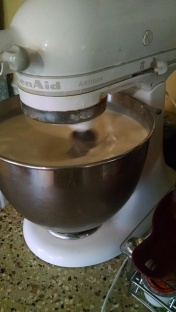 Whipping the cream into butter

“For in Calormen, story-telling (whether the stories are true or made up) is a thing you're taught, just as English boys and girls are taught essay-writing. The difference is that people want to hear the stories, whereas I never heard of anyone who wanted to read the essays.” ― C.S. Lewis, The Horse and His Boy Join us on our family adventures as I try to tell our stories rather than bore you with more online essays.
View all posts by ashleekiser →
This entry was posted in Farm Life, Friends, Kitchen Adventures and tagged cheese making, dairy, fresh mozzarella, Orchard House Creamery, Pioneer Woman. Bookmark the permalink.